Share All sharing options for: Jeremiah Bacon Toasts 5 Years at The Macintosh

When The Macintosh opened in 2011, it quickly became a favorite on Upper King Street for their Bacon Happy Hour, award-winning burgers, and the more refined dinner menu. That's the kind of balance owner Steve Palmer of Indigo Road Restaurant Group and executive chef Jeremiah Bacon were trying to craft from the start. It's at once a neighborhood tavern and a James Beard nominated restaurant. With five years on the books, Eater Charleston spoke with Bacon for an update on the state of the King Street eatery today. 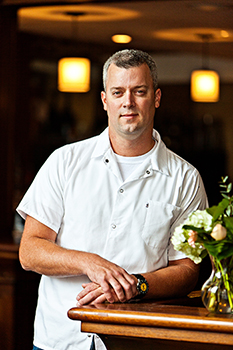 How does this year compare to the first year?

With the enormous amount of new restaurants that have opened there are more options than ever. It pushes us to challenge ourselves with a higher level of food execution, consistent service, and an exceptional guest experiences.

How has the restaurant changed over the past five years?

There is definitely a sense of having to evolve and not get static. I think the restaurant has matured and fallen into a place where it is very comfortable with itself. I always think it takes a few years to make adjustments, refine, and grow. Our staff is the heartbeat of the restaurant and that is where we put the majority of our effort. Right now the heartbeat is very strong.

Were there any pleasant surprises in the past five years?

The addition of the courtyard was a last minute surprise. That area became available to us about six months after we opened. It has been a wonderful addition to the space, and it has developed into a full time extra dining room that also allows us to host private parties.

Has there been anything that didn't work out as expected?

What can never come off the menu?

The gnudi, the burger, and the bone marrow bread pudding have been on since day one. We change the gnudi set-up all of the time. The deckle (the spinalis cap of the ribeye) came off last year for about a month due to extremely high market prices. There was an uproar to put it back on the menu.

We sell A LOT of seafood and in so many different styles. I had an idea that the deckle would be a hit, but it really took off.

What’s a favorite moment from the past five years?

Having a visiting chef cook at the restaurant is always a treat. To share our restaurant with them and have an opportunity to meet them and spend time cooking is always such a highlight for us.

To celebrate the anniversary, The Macintosh will offer a variety of specials this week. From September 21 to September 23, guests can order three courses for $40 and menu items from the original restaurant opening.