Chef John Currence On What He Really Thinks of Charleston

Share All sharing options for: Chef John Currence On What He Really Thinks of Charleston

When James Beard award-winning chef John Currence stopped by Charleston for a brief visit, Eater got a chance to chat with him about his views on the Holy City and his new breakfast cookbook. If you don't know Currence, here's what you need to know: he has an empire of restaurants in Oxford, Mississippi, which started with City Grocery in 1992, and he's very outspoken — seriously, he doesn't hold back.

Where do you hang out while you're visiting Charleston?
AC's and Salty Mike's. I'm absolutely crazy about Salty Mike's. I had one of the most bizarre experiences of my life there, so I'm married to it forever.

I'm desperately trying to get in shape to prolong my life and to torment my wife and help raise our three-year-old. When I got here, I got dressed and went for a run. I got about four-and-a-half miles under my belt, and there I was at Minero — and I was starving. So, it's Sunday afternoon, and I thought I'd stop in for a burrito, but of course, I can't say no to an El Satánico. So I had one — knowing full well the effect it has on me — and what a bad idea having a second one would be.

You have to stop after one.
Nope. I did not stop after one. I went for a second, because I had finished off my burrito. I was still a mile-and-a-half from my hotel, so I had to run on a Sunday, on King Street, full of people walking like they are eighty-years-old or on The Walking Dead. And I was half in the bag when I start running back to the hotel. It was awful. I wasn't going to give in. I was going to beat it. I think that's a once in a lifetime experience. I won't do it again.

On this trip, I had dinner at The Ordinary on Sunday night, and I think Mike Lata should be bronzed.What year would that have been?
1985 or so? It was a tragic time for fashion, hair, and music. There was no food scene. I ate with Louis [Osteen], who was a mind-blower for me. That was the first wave of chefs waking up from their slumber to explore Southern food. To see what is happening here now is amazing.

On this trip, I had dinner at The Ordinary on Sunday night, and I think Mike Lata should be bronzed. He's not only a good chef, but he's one of the greatest people I know. My only response to his food can be anger, because most of the time I'm thinking "I'll never make anything half this good."

Your new book is about breakfast?
I'm excited and terrified at the same time. The first book was such an incredible success. I know there's no way this book can be as well received as that one. The brand and the look of the first — we nailed it so well. It didn't matter what was in the inside, people just love that look and idea. It's strange. People really respond to this profane voice I have. And it's my agent's fault — he has a worse mouth than I do. I struggled with that book for years and felt like growing up in the company of guys like John Egerton, Bill Neal, John T. Edge, and Frank Stitt — all these guys who have put together pieces, whether long or short, every word drips with meaning. I felt if I was going to write something, I wanted to contribute something to the conversation, and I am minuscule in the company of the guys I just listed. I don't have anything I can contribute to this knowledge or thought on the legitimization of Southern food and the meaning of it, so I just wrote this shit for years that sounded like somebody trying to sound like John T. Edge. It was just awful.

... I just wrote this shit for years that sounded like somebody trying to sound like John T. Edge. It was awful.Fortunately, I have a ton of friends who are well-regarded writers that read it, and they all said, "Write like you talk." But I didn't know how to do that. I didn't understand this simple concept. I was trying to write what I thought an audience wanted to hear. One night in my office, frustrated as hell, I finally deleted another ten pages of shit and poured myself a glass of bourbon and had a second one and all of a sudden, I started writing a story about my mother's horrible-ass beef stew she used to make.

It was a stew that my dad and my brother looooved. It was their favorite thing. I just hated it. I didn't regard her soup as a legitimate meal. I wanted meat and potatoes and vegetable in individual piles. It was Mardi Gras, and all of our friends were coming over so we could go to the parade together, and my mom told me if I didn't eat my soup, I couldn't go. I was seven or eight, and I thought no way my mom would embarrass me by not letting me go to the parade. Sure enough, everyone showed up and she told me, "Don't move. You're going to finish that fucking soup." We sat at the table, crossed-arm, across from each other. Everyone went to the parade, and we sat there, sat there, sat there, and a couple of hours later, everyone came back, and she told me to go to bed. I got up the next morning and sure enough, there was Joan Crawford with that fucking soup saying, "You're going to eat it for breakfast." She won.

We're telling the story of our lives when we are talking about food.

That story came out, and it was fully profane. I sent it to my agent and said, What about this?" And he said, "That's it." "That's easy," I said, "I could do that shit all day." If you start me talking about my father, we can fill an encyclopedia set.

Every recipe in the book has a story. We're telling the story of our lives when we are talking about food. Now I'm trying to do it a second time. 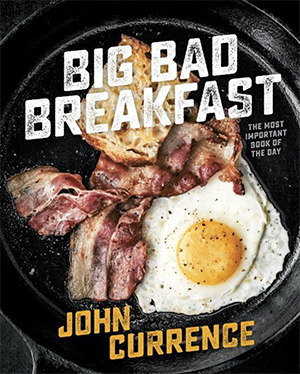 Is it easier or more difficult the second time?
I had an entire lifetime of stories for the first one, but this one has more focus. I'm not as in touch with each recipe as I was with the first. Like, what's a story from my life that goes along with waffles? It was a little bit more of a challenge and I struggled with it mildly. My wife is an incredible editor, and she helped me through it. She'd pat me on the back and tell me, "You did this last time. You do this every time you sit down to write. It's going to be fine." I can't make myself look at the galley. I don't want to see it. I'm terrified. I'm looking forward to it coming out though.

As long as we keep Big Bad Breakfast going, we can continue to keep selling these books. It's a good time for breakfast. It's a niche in the market that's underserved. People are starting to pay more attention to breakfast and for once in my life, I was actually the first guy at the table to really sort of address a chef-y look at breakfast. I'm proud of it.

The day we opened Big Bad Breakfast, the health inspector was there and the chef and the manager were chasing her around, trying to explain why the walk-in cooler looked like it had exploded everywhere, and there were 200 people waiting outside. I remember just all of a sudden, I was standing in the dining room looking around and my wife, who was working in the restaurant at that time looks and me and asks, "What the hell are you doing? " And I said, "This is going to be the place to put us on the map," to which she responded, "Are you crazy? Do you not see what's going on here? You've been nominated for the Beard Award over and over again, you've been on tv and magazines — what are you talking about?" I thought, "This is it. This place is special." And I was right.

People respond to that place so viscerally. There are five mentions of that place for every one mention of the other restaurants. People just love it. It's not an easy way to make a living selling eggs. Breakfast is a tough meal, because folks com hungry, tired, and half awake, and they want their stuff, and they want it in a hurry. It demands a very quick ticket time. That's how you survive selling eggs, you have to turn tables. We've been blessed with an incredible crew for the past eight years.

Currence hopes to make it back to Charleston when the Big Bad Breakfast book tour happens. He says there are no solid plans yet, but wants to make sure the Lowcountry reads his gospel of the morning meal.