A look at the restaurant through its chef's musings

Tonight, chef Sean Brock celebrates 10 years in the kitchen at McCrady's with an anniversary dinner full of chefs from the restaurant's past. Before Brock became the name synonymous with Southern cooking, he took over Charleston institution McCrady's as a fresh-faced 27-year-old and, at the same time, started a blog, Ping Island Strike. One of the first entries reads, "This picture is from day one. It should be interesting to see how this picture progresses in the future …" Titled "Arrival," the post shows off Brock's culinary toolkit ready to forever change McCrady's kitchen.

Ping Island Strike became a behind-the-scenes look at Brock's kitchen in a time when not many chefs were putting out content like they do today on Twitter and Instagram. The writing was sparse and the photos weren't great, but the blog had a following among local restaurant nerds and food journalists.

In 2006, Brock confessed to being "obsessed" with "powdering things" like foie gras and concocted dishes like tuna with grapefruit and soy sauce cotton candy, but he also kept a focus on local farms. There's a lot of foie gras in those first posts, but there's also triggerfish, Lowcountry shrimp, and bourbon — ingredients that are now more associated with the name Brock, due to his Southern-only restaurant Husk. 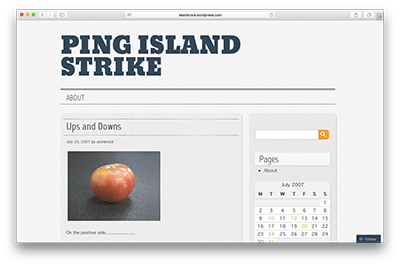 In July 2007, Brock writes about his frustration of saving seeds from his grandmother's garden, growing the tomatoes in South Carolina, putting together a tomato tasting menu, and only having five people order it. "Why aren’t people interested??  If you went to a restaurant and the server told you that the chef grew some of the tomatoes himself and was very excited about the tomato menu would you order it???" You almost want to comfort 2007 Brock and tell him that this concept of saving seeds and ultra-local cooking would one day win him awards.

Throughout the years of Ping Island Strike, you see the progression of Brock's work and gather a better understanding of what brought him to where he is today — 10 years past those first days at McCrady's and with multiple other restaurants, Minero and Husk, in multiple other cities.

"The dish that changed the way I look at FOOD"

One of the last entries on the blog is titled, "The dish that changed the way I look at FOOD" The dish is "a simple bowl of rice," which Brock explains is his favorite because "it tells an incredible story." The rice communicates the history of Charleston, and he says, "it often helps people realize how a foodstuff can influence and help shape a culture." That was in 2012, and the conversation still continues today.

4. "There is nothing more satisfying than preserving food." December, 2009