Where to Eat at Joseph P. Riley, Jr. Park, Home of the Charleston RiverDogs

Share All sharing options for: Where to Eat at Joseph P. Riley, Jr. Park, Home of the Charleston RiverDogs

Lowcountry-based minor baseball league, Charleston RiverDogs, start their season with a home exhibition on April 6. To many fans, baseball in the Holy City means boiled peanuts and cheap beer, but, as always, the Dogs are bringing more eating options this year. New food and beverage director at Joseph P. Riley, Jr. Park (The Joe), Josh Shea says, "This being the 20th season at The Joe, we felt it was the right time to have creative changes in our overall setup and food options this season and to stay current with food trends."

All Star Menu Items at The Joe 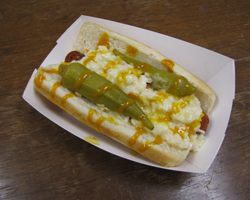 The RiverDog: The RiverDogs' most popular meat in bun item is their signature, eponymous hot dog. It's an all-beef dog topped with cole slaw, mustard BBQ sauce, and pickled okra. This item is located at the Dog House and Dog World concession stands. 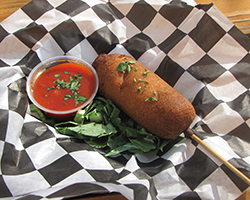 Shrimp-N-Grit Corn Dog: The Joe is perhaps the only place in the world you'll find the Lowcountry traditional dish of shrimp and grits wrapped in a hushpuppy batter, deep-fried, and served on a stick with a tomato gravy. It almost sounds like a dare. 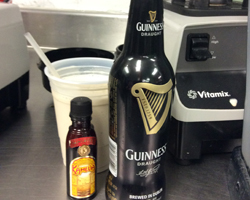 Beer Shakes: Introduced in 2013, these boozy beverages quickly became one of The Joe's best-selling items. It's a milkshake minus the milk and with the addition of a specialty beer, flavored syrups and ice cream. Check the Pie House for flavors, like the new  Palmetto Biscotti Shake.

At The Joe, there is one general concourse area where all the food locations are open to the public. There are private picnic areas, with menus for large group outings, located on the third level. The fancy Suites (Sky Boxes) are located on the fourth level.

Sangria Wine Garden: Sometimes you don't feel like a beer and this year, Sangria Wine Garden can accommodate those looking for a rosé. The outlet will feature house-made sangrias and wines by the glass. For something stronger, the Firefly Tiki Hut is located next door and offers signature Firefly Cocktails, like a peach moonshine mojito.

The Palmetto Beer Garden Located across from the Souvenir Shop, this beer garden offers multiple drafts with plenty of locally-made options from Palmetto Brewing.

Scoops Concession Stand: The first concession stand on the right side of the concourse includes menu items for ball aficionados with a sweet tooth. At Scoops, patrons will find hand-dipped ice cream, milkshakes, candy, and the stadium's kid's meal (peanut butter and jelly, applesauce, and a Capri Sun). New this year, Scoops offers adult grilled cheese sandwiches, like the Brie and blueberry option or the Gouda, bacon and tomato alternative.

Pie House Concession Stand: Get your slices of pizza at the Pie House. Also, look here for the beer shakes and spiked beer shakes (beer shakes with a shot of booze). Flavors include the new Palmetto Biscotti Shake with Biscotti cookie dough, vanilla ice cream, caramel syrup, and Palmetto Espresso Porter. The Pie House also features the Drunkin' Brat, a bratwurst topped with beer cheese. And for the first time, dessert pies will be available.

Grad-N-Go: As soon as fans walk into the park, they'll find this stand stocked with Pepsi, water, beer, and ballpark snacks.

RiverDogs’ State Fair: Seek out this spot if you're hankering for funnel cakes, fried Oreos or popcorn. The stand got an update this year with a chicken and waffle burger (exactly what it sounds like, chicken between two waffles and drizzled with Sriracha honey), a RiverDog dog deep fried in an egg roll wrapper, and a deep-fried pecan pie cheesecake on a stick.

Dog World Concession Stand: At the end of the concourse, on the Marsh side of the stadium, is Dog World. The specialty hot dog stand and healthy menu item location includes all the stadium specific meat treats, like the RiverDog, the Yankee Dog, the Homewrecker, a pimento cheese option, the Pickle Dog, and the Southern Kimchi Dog. New this year: the Picnic Dog, an all-beef Hebrew National six-inch dog topped with slow-cooked baked beans and topped with  jalapeño bacon and the Hawaiian Dog piled with pineapple relish and topped with lemon and herb aioli.

Dave's Country Kitchen: Grab unique Lowcountry dishes, like pickled shrimp, near the front gate at this new addition to the park. There's a shrimp and grits corn dog, which is basically the familiar dish wrapped in hushpuppy batter and deep fried. The Chuck Town Hot Brown is Texas toast topped it with a grilled shrimp cake, poblano queso, sliced pickled green tomato and jalapeño bacon.

Craft Spuds-N-Suds: Located adjacent to Dave's Country Kitchen, there will be craft beer and plenty of French fries at this stop. Spuds-N-Suds also offers the Charleston Poutine, which is Carolina gumbo poured over the top of curly fries and finished with fresh herbs.