One last Charleston Wine + Food Festival before he goes.

Fans of the pulled squash or indulgent burger at Butcher & Bee have less than one week to pay their respects to sandwich/late night master supreme Stuart Tracy, before he makes his way to Atlanta. Since B&B opened in 2011, Tracy has been an integral part of the team and helped craft the menu that brought national attention to the King Street establishment. 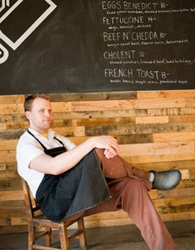 Operations Director Randi Weinstein wishes Tracy well, stating, "We are sad to see him go and he has done amazing things for us at the Bee! He is a stand up guy and in an industry that is so demanding, a true gem to work with."

Long-time employee Chelsey Conrad will step in for Tracy's role at B&B. She has worked for the restaurant for the past three years, and Weinstein is confident that Conrad will keep the same "quality, style [and] creativeness" that fans have come to expect.

Tracy's last day will be this Saturday. After that evening, he makes his way to work at neighborhood brasserie Parish in Atlanta. Weinstein adds, "We wish him all the success and hope he has a ton of friends come by and wish him all the best these next few days. He deserves the best outgoing party there is."