Welcome to One Year In, a feature in which Eater interviews the chefs and owners of restaurants celebrating their one year anniversary.

Share All sharing options for: Faculty Lounge Still Shaking (Cocktails and Booties) a Year After Revamp

It all started happening about a year ago — photos of cool kids hanging at Faculty Lounge popped up on Instagram, having a great time and looking damn good doing it. This didn't look like the old disco-ball-and-dance-floor Faculty Lounge, this was a new Faculty Lounge. The Huger Street club with the bright red door has had several lives. The first was as a neighborhood bar in 1970s for local teachers, then there was a next generation of owners, an attempt to bring back the focus back on music in 2012, and then in 2014, owner Rudy Cochran asked a couple of regulars if they wanted to take over. 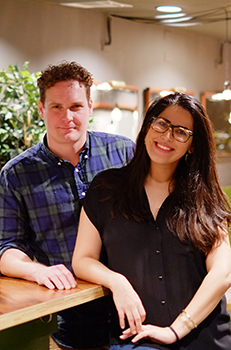 After moving in across the street, husband and wife duo Erik Hutson and Nayda Freire frequented Faculty Lounge. Cochran propositioned the couple to assume control of the space, the maintenance, and the bigger picture. "He wanted to enjoy his bar from the other side of the bar, as a customer," explains Freire. "It was a little smelly and a little dive-y when we took it over. We wanted to turn it into a neighborhood hangout again," says Hutson.

As Upper King exploded with new establishments, the couple missed having an intimate, neighborhood bar — they wanted easy, fun, and accessible again. Basically, they longed to create a place where they would want to hang out and with good cocktails. "When we came here before," Hutson says, "it was more of a beer and a shot bar, which was super fun, but sometimes I would bring Nayda in here, and she would want a nice cocktail to start the night instead." "I don't drink a lot of beer, and you can drink a PBR anywhere, so there was no real added value," recalls Freire. "We wanted to add a component that other bars around here were missing — a cocktail program with nicer spirits," we wanted to be able to offer something rare. 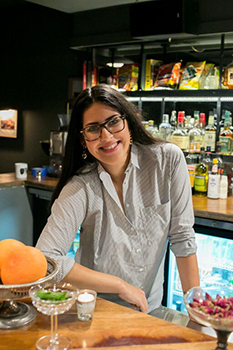 Though they didn't change the exterior, the team completely revamped the interiors and upgraded the cocktail list. Now, Faculty Lounge serves brandy-laced libations, stocks esoteric spirits, keeps high-end bourbons on hand, and always supplies cans of affordable beer. Freire assumed the role of head mixologist and approaches cocktails one ingredient at a time, with an eye on interesting liquors.

But it's not all about the drinks — they are having fun too. Dance parties with DJs, like Party Dad, Jeff ET, and JAZ, occur regularly. They've also hosted a rosé evening, Tiki Tuesdays, and a Beyonce night.

For year two, Hutson and Freire want to keep spreading the good word of Faculty Lounge. They don't advertise, so word of mouth brings many customers in. With more businesses are popping up in their North Central neighborhood, should bring more traffic to the area, and bring new faces to the bar.

If you haven't visited Faculty Lounge, it's located at 391 Huger St. — ring the doorbell and one of the staff members will buzz you in. Don't let the looks of the exterior intimidate you.