After 28 Years, Eli Hyman Still Has a Passion for Service

Welcome to a special Classics Week edition of Lifers, a feature in which Eater interviews the men and women who have worked in the restaurant and bar industry for the better part of their lives, sharing their stories and more.

Share All sharing options for: After 28 Years, Eli Hyman Still Has a Passion for Service

Meeting Street principal Hyman's Seafood was among the first restaurants in Charleston to get national attention. Southern Living took an interest, and soon it became the place to visit while in the Holy City. As with many older establishments, Hyman's walks the line between catering to throngs of summer tourists and trying to attract locals, whose attention is now drawn to King Street eateries. Eater caught up with owner Eli Hyman to talk about his 28 years with the eponymous restaurant. The building at 215 Meeting St. has been in his family for generations, and Eli hopes to still be running the place well into his 90s. Here, he talks about his passion for customer service, and why he considers himself an ambassador for the city.

How's it feel being a Charleston classic?
I'm honored that y'all chose us to be a part of Classics Week. You can go around and interview people in the business, and they'll tell you how great they are or the new things that they're doing — but, in my opinion, the secret of this business is caring, and just being you. I think the most important thing is being here, caring, and having the people surrounding me being on the same page, as me, as far as customer service goes and attention to details. If they care, then they make my job easy and enjoyable.

I look for my people to take a sense of ownership of what's going on at the table and what's happening in the kitchen. Finding people in this industry who really care about customer service is key. If they're doing it just for money, that's fine, but then this isn't the best place for them to work. They're going to make great money, but we'll see through it immediately. I want them to please the customer or put out a nice plate because they actually care about what they're doing. It's easier said than done — getting the right people at all times. I would say the overwhelming majority of my staff are fantastic.

You guys were early ambassadors to national food press for Charleston, how does that make you feel?
I feel that everybody in our industry — hotels and restaurants, as well as retail shop owners — are ambassadors for the city. I keep expanding upon that. How we treat the guests that come to Charleston and how we treat locals keeps the flair of Charleston a sincerely friendly and Southern town. We don't want to become a New Orleans. I'm strongly opposed of the growth that is going to turn us into a wild party city. Bars are great, and it's good to have night life — I like to see all these people in downtown King Street. It's wonderful, but I think everything needs to be regulated so people aren't walking around throwing cups against people's homes at 2:00 a.m. We don't want to go down that path. And I love visiting New Orleans, don't get me wrong, but I want it to stay there, and I want Charleston to keep its charm.

... I want Charleston to keep its charm.If we do something with the hotel association or the tour guides association, my central theme is about being ambassadors to our city and that each one of us, whatever our job class is, represents the city. It's like a house versus a home and what makes the difference. A city versus a town and the feeling that tourist get here — that unique experience that they feel here. It's not just about buildings, but when people go into the shops or walk down Market Street and King Street  and see how nice and courteous people are, people pick up on that. They really migrate to that and that's what makes Charleston unique.

It's harder for restaurants that have been here for a long time to get a write up, because we're not recreating ourselves. If it's not broke, we're not going to fix it. We've created a destination restaurant for so many visitors that come here. Our marketing is built on making sure that a customer at the table walks out of here wowed by the experience. If they do that, they become our marketing. It's not rocket science. We just have to do our job great every single time. Of course we're not always going to be 100%, but there's no restaurant in the world that can be 100% every single time. If we make the customer feel that we're sincere and we want them to comment, so  even if we screw up, we want to quickly remedy the situation. That sincerity goes a long way with customer service. They then go out and do the rest of the marketing for us. That's the cheapest most effective marketing there is. You know, people give me a lot of credit in town for being a great marketer, but I'm not — it's not humility, I'm really not — what I am good at is making sure people leave happy and having the correct people to represent me well.

Have you ever felt the need to recreate yourselves over the years?
A few years ago, we went down this healthy road because people said, "Oh they just have fried seafood there." We have seven preparation styles, and fried is just one of them. But people identify this place as being a fried tourist trap seafood house — whatever the negative connotations are. So, we were highlighting a lot of the healthy alternatives on our menu and you know what — it didn't sell well. We had a quinoa and spinach salad, and it was good. I loved them personally. I try to eat healthy.

Do you think we should recreate? 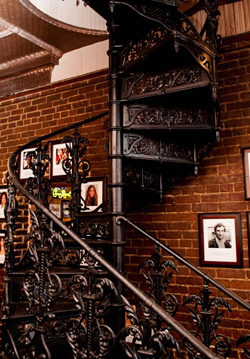 I think there's a place for what you're doing. Whenever people come here, they always want seafood. About 5 years ago though, Charleston started to see a new type of tourist that wants to eat at the hot and new places.

And they stay hot and new for about a year and a half to three years, and then a hotter, newer place opens up. To stay relevant in people's minds for 28 years — that's tough. You've gotta sincerely care about what you're doing. You can't just be putting this on as a facade for 28 years, or you'll burn out way before then. I meet the nicest, most interesting people for whom this becomes a destination. They come to Charleston, they shop on King Street, they eat at Hyman's, they go to Market Street, and they go to the beach. We see them year after year. One of the most gratifying things is families who came in when their children are little and now they have children of their own. We become part of their family memories. When they come to Charleston, we're the must stop. We're only going to stay that way, and I tell my managers this, if we do our job great every single time. You can screw up one time and people may be somewhat understanding, but you do that twice in our industry and they're going to try a new restaurants — there's too many other ones to try.

I worked back of house, and I stunk at it.Did you always know you wanted to be in this business?

Not really. No. And two of my four children are interested, but I don't push them. I want them to be passionate about it. I don't want it to be a fall back plan for them. But, I love it. I hope to do this well into my 90s. Originally we were a wholesale dry goods warehouse. It was a clothing warehouse, and with the Walmarts and how industries change, it became irrelevant in which the way we buy our clothing. I worked for my father and grandfather when I was very young. If you wanted quick money, working in restaurants was a way to do it. I worked as a waiter, busboy, and dishwasher, from when I was twelve years old up to my mid-twenties. My girlfriend, now wife, lived in Sweden, and if I needed $800 quickly to get to Europe and back, the restaurant business was perfect for that. The schedule was flexible, and you had little responsibilities. So, no I didn't really think about it, but I knew that I loved people, and I knew I was very good at customer service. I worked back of the house and I stunk at it. For the first 15 years, I could get back there and hang with the cooks, but it's not my strong point.

In the years you've worked here, has the clientele changed?

How do you recreate your image as a tourist destination restaurant without losing the flavor of who you truly are?

I'm pretty confident that if I can get people in the door, I can't say 100% of the time, because of biases, but 80% of the time, I'm pretty confident that people will be genuinely surprised at how good the food is — for what we charge, and the freshness of our food. Our scallops for example — most fine dining places don't use a scallop as good as our scallop — we're paying $16 to $19 a pound wholesale, but the very high-end places, and I won't say where, can get away with using an inferior scallop. If they put a sauce on it or scampi it, you may not know. We use dry packed scallops, straight from the sea, and there's a price to pay for that. We can use a great product and sometimes the foodies will still say, "It's terrible I'm not going to eat it."

It's a crazy business. I love it.Fifteen or 20 years ago, us and Magnolias got a lot of press, and there was maybe a third of the restaurants on the scene back then, but then Hank's opened up, and they got all the press. They became the new Hyman's and Magnolias, and now they get mentioned somewhat — not as much. So, now it's Hall's.

It's a crazy business. I love it. It gets in your blood. I hope that we all have enough visitors to come in to visit all these restaurants, which is ironic a little bit, because people call us a touristy place, but if you don't cater to the tourists, you're not going to make it. We've done our job well with the tourists, and they are big fans of the restaurant.