The history of Oak Steakhouse is split into two stories. In the beginning, in 2005, chef Brett McKee was in the kitchen. McKee was an "uninhibited" personality, and his version of Oak was a pre-recession Bacchanalia. In time, the restaurant fell out of favor with the new class of food adventurers traveling to Upper King. By 2010, owners Michael Myers and Andy O’Keefe recruited managing partner Steve Palmer to turn the steakhouse around, and McKee left to work on expanding a different concept. Palmer brought in an under the radar — at the time — chef Jeremiah Bacon from the former Carolina's. The Bacon/Palmer team would change everything. On the anniversary of Oak's tenth year, the team talks with Eater about the challenges and outcomes of taking over the Broad Street classic.

Why was it important to take on Oak Steakhouse?
Palmer: It's funny how these things go. This is how small the world is: Michael Meyers [current Indigo Road business partner] was at a restaurant in Atlanta called Bones. Bones is an Atlanta institution. It's been there since 1976. Kevin Krapp, our current general manager at Oak Atlanta, was running Bones.

Jeremiah, why was it important for you to join the team here?
Bacon: Jamie Waby [former GM at Carolina's] and I were trying to do something similar to what The Macintosh is now. Over the course of two years, we tried to get a few spots, and after the last one that fell through, Jamie said I should talk to Steve. So, that's how we first put it together. When we first spoke, our concept of The Macintosh was very similar. We had other similar ideas, so I came aboard Oak. But that first year was tough.

Palmer: We were slow.

Bacon: We were slow, and we had some staff issues. That first year was about building a team, stepping back, focusing, and setting down a new path. It was one of the most challenging times in my career.

Palmer: The development had all moved away from Broad Street, so we were fighting that. When Brett left, he had fans — people that didn't come back. It was like trying to reestablish an identity within an existing identity. It really is harder than telling people about a new place that just opened.

I think that for us, The Macintosh helped Oak, in a way that it was a new venture to eat Jeremiah's food. Guests would say "Oh, yeah, this is the chef that took over at Oak, we need to revisit Oak." In that way, I will always say that opening The Macintosh helped us here.

It's very much a different customer here. It's very neighborhood driven. Our guests walk here. They appreciate what we're doing. I've opened a lot of restaurants, but I've never been a part of trying to turn around something that had such an identity in one direction. It's very rewarding. 2014 was the busiest year — sales wise — which shows we brought it back and exceeded where it was. And it's really due to the staff. We've got a group of very invested people. Even the servers are invested — they don't hang out on Upper King after work, and they're a little bit older. There's a real sense of pride here. 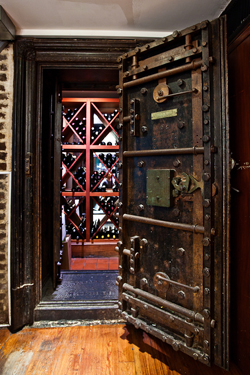 Bacon: It's all about the team and how they embrace the restaurant. We've got so many locals that come in and know everyone. Before, it was all about the show and what Brett did, but we want to focus on the food and the experience and treating the guest well. It's all about them. It's not about the Bacon show or anyone you know —  it's a group effort. Even at The Macintosh, it's not the Jeremiah experience, it's The Macintosh experience. We greet everyone at the door, and it's a group effort. And that consistency is the biggest challenge of any restaurant, anywhere in the world.

When you came aboard, was there something you weren't allowed to change or that the customers were against?
Palmer: We changed pretty much everything.

Bacon: We changed a good bit of stuff. The sizzle platters were one of the things that the owners loved. We're a classic steakhouse, so it fits with the ambiance.

Why is it important for Charleston to have a classic steakhouse?
Bacon: I think the word classic or timeless just tells you. It's never going to get old. Good service, good food, and hospitality were good in the 40s, 50s, and today. There's a lot of different concepts and trends in Charleston, but we focus on the core things, and that's hard to beat. If you make it good, people are going to come. If you have the hospitality, they're going to show up.

Palmer: I find it interesting that this is the first steakhouse I've been involved with. My career prior to here was a lot of high-end fine dining back in the 90s, when opulence was in. The foodie set — I'm not saying that as a good or bad word — the culture is very much about the trends in food, and they don't eat in steakhouses. What I have found to be universally true, is when you look at the 100 year old concepts, they are all steakhouses. They're the ones that endure and last. I'm always blown away by how many people come here and may not eat at a Macintosh-type place and find this very satisfying. It reminds me that there's different dining for different people. I think that a concept like this endures. It's relevant.

We changed the things that needed to be changed. We're buying from local farms. There's no corn on the menu in the middle of winter, because there's no corn in the Southeast in the middle of winter. I think we changed, and people went with us. There were some of the old-school Italian dishes, that when we took them off we heard about it. For a while we had to have them in the fridge, but people eventually embraced what we were doing.

Palmer: There's a loyalty here from our customer base that's indicative of a steakhouse. There's a loyalty when it resonates to people. It's refreshing. There's no pretense. It's just an honest "We love this place because that's a great steak." It's very simple and pure. It's been neat for me to experience that. I probably had the same kind of judgements about a steakhouse that other people do.

What would you say to those people?
Palmer: It's so friendly here. You can have a $25 steak, and you don't have to spend your mortgage here — though you can, and we will let you. I think the minute you walk in the door you feel welcome — and that's with all of my places. The highest compliment I ever received was someone said to me the other day, "Every time I go into Indaco, they're so nice." That's the highest compliment.

Just come visit Oak. There's not ten bars to walk to after dinner, so you're coming for the night and the experience, but you're going to be treated so well, and it's authentic and sincere.

Bacon: I love when people tell me, "I don't really like steak, but this is my favorite restaurant." On Sunday, Monday, Tuesday, Wednesday, we get a lot of locals come in to eat seafood, vegetable plates, oysters and really mixing it up. At the end of the week, it's the ribeyes and the filets, but we want this to also be an everyday restaurant. You can come in at happy hour and have a ten dollar burger. A 10 ounce burger with filet and New York strip — it's great.

Oak Steakhouse will celebrate their 10 year milestone with a party on Wednesday, January 28, from 5:00 p.m to 7:00 p.m. Guests are invited to stop by for complimentary hors d'oeuvres and a champagne toast.