Modern Italian on Upper King: One Year at Indaco

Share All sharing options for: Modern Italian on Upper King: One Year at Indaco 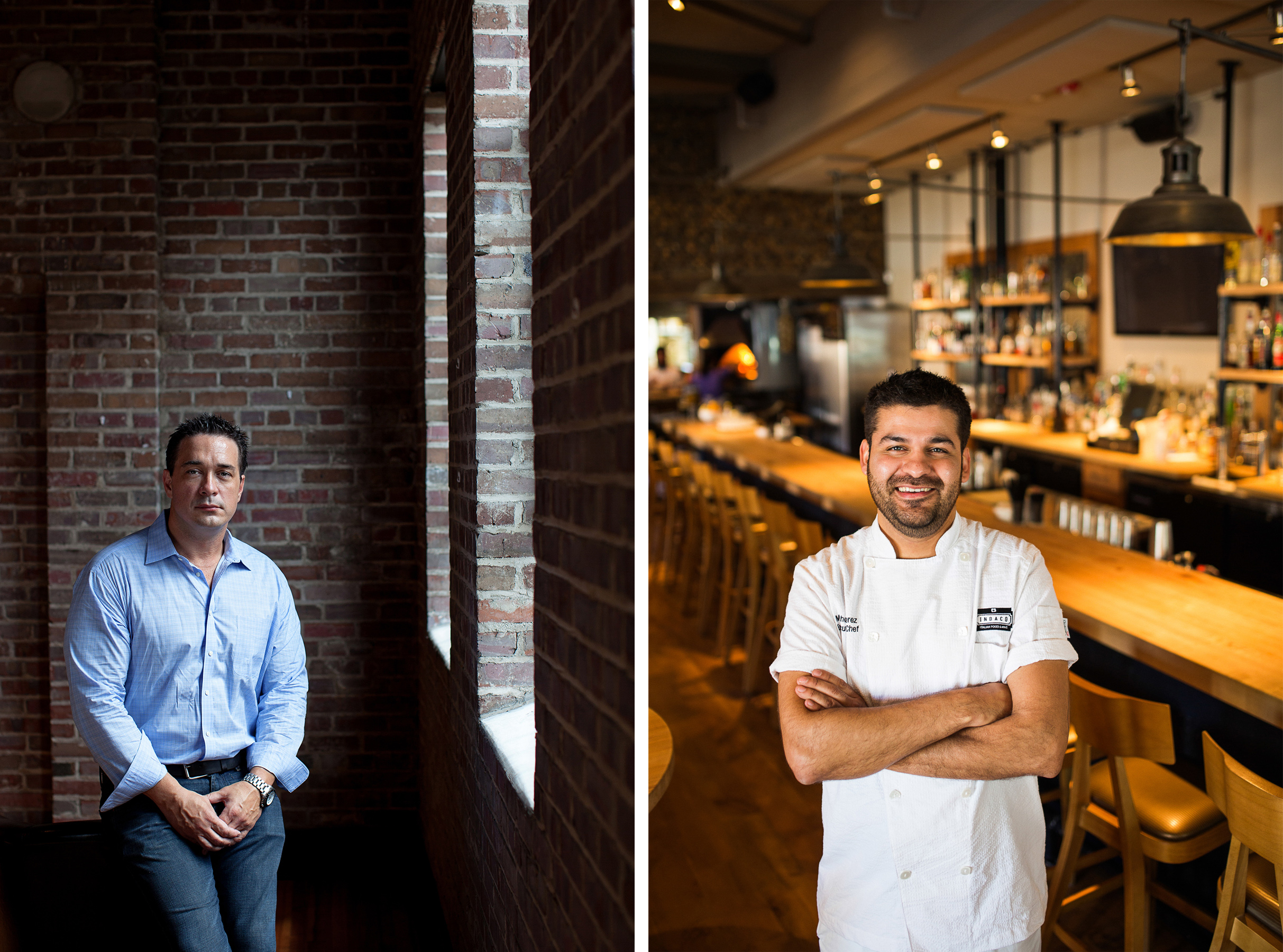 [Photos of Palmer and Perez: Provided]

It's been a smooth first year for Negroni and pasta slinging establishment Indaco, especially considering the restaurant lost their executive chef, Robert Berry, four months after the doors opened. However, if patrons hadn't heard about the changeover, they may have never noticed that Indaco carried forward flawlessly under the capable hands of then sous chef (now executive chef) Michael Perez.

On the anniversary of the highly-anticipated opening, Eater chats with the faces of Upper King's hottest spot for budino and burrata. Perez continues to head the kitchen that recently won the approval of famed critic John Mariani. Restaurateur Steve Palmer says that Indaco is exactly what he imagined a year ago. And while general manager Jon Murray wasn't there on day one, he's still proud to be part of the modern Italian establishment now.

Why did you decide to start Indaco?
Palmer: Just like with O-Ku and The Macintosh, all of my inspirations come from travel and experiencing something else. About eight years ago, in San Francisco, A16 opened. Five years ago, Locanda Verde opened in New York. I think for those of us that have been in the business for a long time—when you say Italian, we all have images that come to mind. A16 was a new thought about Italian. I remember going into Locanda Verde and, aesthetically, if you didn't know the menu, then you wouldn't guess Italian. It's a pretty restaurant. All of the Chianti bottle stereotypes were gone. The chefs were taking the gastropub concept that was sweeping the nation eight years ago and bringing it to Italian cuisine. Historically, we used to ask if it was Northern Italian or Southern Italian, and with Indaco, it's just an Italian restaurant. It's a combination of all the things that are great about Italy.

I don't open anything that I'm not passionate about. You'll never see me open a Lebanese restaurant or a Chinese restaurant. I love Italian food. I love the sense of dining, which is reflected in our "For the Table" options. I think Italian food is the most communal food there is. Indaco was a little bit of A16, a little bit of Locanda Verde, and a need for this sense of communal dining that drove me to do it.

What attracted you to the space?
Perez: I remember coming in for an interview, seeing the space, and thought it was beautiful. Coming from the West Coast and growing up going to places like A16 and Tabla in Portland, I understood Steve's vision for the restaurant. With Charleston becoming such a booming town for food and beverage, I thought it was a beautiful thing being created. All the people that were flocking to our restaurant got me into it and all the good things I'd heard about Indigo Road. When I landed in Charleston, I didn't know a single person and this restaurant group's name kept popping up. Coming to a company that really listens, understands, and shares visions is great.
Murray: I wasn't here from the beginning. I was at O-Ku. And knowing Steve's passion for what he does, and how he—and we—make guests feel was my biggest attraction for coming here.

Have there been any changes in your vision since day one?
Palmer: [shakes head] No. It's modern Italian food—we don't have spaghetti and meatballs. Michael really embodies exactly what I was thinking, which is rare. That does not happen every single time. It's exactly how I thought it was going to be, which is odd for me.

When you came on, did you already think this is the sort of food you would want to be doing?
Perez: I think the good thing about Indaco is the progression of the menu. If you came in last week, there will probably be eight items that will change next week. It comes with a young staff. These kids are taking cookbooks home from our shelves, and eating at other restaurants, and buying new cookbooks. They're really investing in a career. I believe that every chef that works under me here will go on to be a sous chef or an executive chef somewhere. Those are the kind of people I want to hire, and those are the kind of people that make this food the type that is. It's progressive Italian.
Palmer: I think there are some classic elements that came in with Michael that weren't as prevalent. As much as I say this is modern Italian, we do keep a few classic elements, like the pappardelle or carbonara, and Michael brought those along.
Perez: I was already here doing the menus with Robert, and I already had a rapport with the staff. As far as transitions go, it was probably one of the smoothest.

Have there been any unexpected hits on the menu? Or something you can't take off without a riot?
Perez: The burrata and the budino.
Palmer: [laughs] I love salty caramel, and a running joke with Michael is that when I love something, he takes it off the menu. So when the budino went off the menu, I literally started getting texts from customers asking, "Where the hell is the budino?" The first night it went back on, we sold 30 of them. He loves to tell me when it doesn't sell.

Have there been any surprises?
Palmer: I think we still, and I asked this question the other day, but we still have some folks that will sit down and are looking for the red sauce and the spaghetti. We are in the process of education, where we are trying to introduce a new thought about something.

Speaking of education, will you be trying out some more daring menu items in year two?
Perez: It's funny. We were just talking about this today. This next month is tough for all of the farms, and we don't have as bountiful of a selection. I think that's where the real creativity will come in. I do these culinary tours in the morning, on Fridays, and they always ask what we do for education in the restaurant. We have lineup every day at 4:30, to educate the staff to be able to educate the guests. Again, with the cooks, and educating ourselves. Tonight on the menu, we're putting an octopus terrine on.
Palmer: Whoa.
Perez: We took the fish heads, to utilize all the parts, from the fish that we already butchered. We smoked it all in the wood-fired oven and those will go in the terrine as well. I think that's a little unusual and something that's a little bit out there.

What are some things you always recommend to first-time guests?
Murray: Grouper crudo, the black pepper tagliatelle, carbonara with a farm egg on top, the pork tesa, and then--as much as I hate to say it, the burrata. It's cheese, bread and olives, and it's tough to beat that.
Palmer: It appeals to the most basic carnal nature—cheese and bread.
Murray: It's cool to get people who come in expecting that red sauce Italian meal and having a staff that can inform them about the menu and suggest something different, something that might take them out of the box.
Palmer: I think this is the best pasta I've ever had in my life.

Do you have a go-to dish?
Palmer: I like stuffed pastas. The agnolotti with short rib has been one of my favorites, and last fall we did a casoncelli, which is a candy wrapper, stuffed with quail and foie gras. That was pretty awesome. I like the lobster ravioli with trout caviar. Any stuffed pasta, I'm a sucker for stuffed pasta.
Perez: I think the chili pizza is phenomenal. It's so basic, like the burrata. It's pulled mozzarella, Calabrian chilies, Cerignola olives. It's one of those pizzas, when I took a bite, I was like, "Yeah, we did this right." When John Mariani reviewed us, he said maybe some things could be too complex, and I think that pizza is what he was looking for, for simplicity. I've been a pasta maker for awhile, so that's sort of my "in" to Italian cuisine, so I think all of our pastas are strong.
Murray: I've gained 15 pounds working here, so all of the above.