Share All sharing options for: Básico Celebrates Their First Anniversary 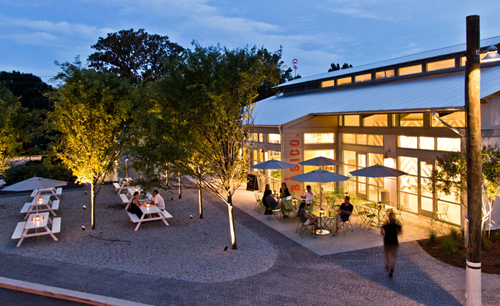 Taqueria Básico is housed inside the Mixson Bath & Racquet Club, but you don't have to be a member to enjoy the authentic fare. Owner Bryan Lewis came up with the idea for a Mexican-inspired restaurant seven years ago and finally saw his plans come to fruition last Independence Day. With 365 days of business behind him, Eater spoke with Lewis about the cantina and what the future holds.

Is Básico everything you imagined?
You do something like this and you have certain expectations and anticipations. It's met most of those, and of course other parts are more challenging, but I think overall it's been a great project. I'm glad it came to fruition. Starting from a concept seven years ago, to actually seeing it go through.

Where did your desire to open a taqueria stem from?
I have roots in Texas and Mexico. My mom grew up in Monterrey, Mexico. I was born and raised in San Antonio. I grew up eating that cuisine. My mom learned to cook in Mexico, so she was always an inspiration there. I worked at Taqueria del Sol in Atlanta to get an idea of how the concept would work. I adapted Basico to be a more non-traditional taqueria—using fresher ingredients and highlighting the local farmers as much as we can. Right now, we've got great tomatoes and peppers in. This is the season that Mexican cuisine thrives on.

How is the menu changing?
Nathan Thurston came in to oversee the kitchen at Básico, the club, and Mixson Market. He is using his expertise to tighten up certain parts of the kitchen, staff it, and manage it. He's been a great addition. We haven't made a major overhaul, but we've made some seasonal changes. We have a new vegetarian taco with Mepkin Abbey grilled mushrooms in an ancho paste, charred spring onions, and some other seasonal salads. We looked at all the sauces and braised meats to see if we could improve it. We've been improving what we have.

Is there anything that has to stay on the menu at all times because it's so popular?
One of our most popular items is the buttermilk fried chicken taco. Nathan took his personal recipe for pickled watermelon rinds and added that to it, which further enhanced that recipe. I would say our corn tortillas are one of the most refreshing items on the menu. We have Mirna Santiago, from Oaxaca, who is here every morning and afternoon making fresh tortillas. She's been a great addition. She'll give us some insight into more traditional dishes. She makes the mole. We use her recipe, but add local pecans. I would say there are some standby dishes, but we'll keep adding on more seasonal dishes. One addition that I think has made a big impact is starting the farmers market. We get all of our produce from GrowFood Carolina and we're pulling a lot of those ingredients from the farmers' market and making specials for the week. It's fun to get to utilize those ingredients and have them available.

What's in store for the next year?
I think you'll see some new additions to the menu. We'll keep the standards and keep improving on them. There will be some fun new changes. It will be a very seasonally changing menu. Building on what we have. I think it's been a fun, but challenging first year, but we've hit our stride and will continue to grow in the neighborhood
· All Básico Coverage [-ECHS-]