Share All sharing options for: A Day in the Life of the Meat Case at Edmund's Oast

Edmund's Oast is not short on uniqueness, but this being The Five Days of Meat, eyes and minds are naturally drawn to the giant, glass-faced meat case hanging above the pass. The diner's view towards the open kitchen literally centers on this box, which acts as both a functional, temperature-controlled home for charcuterie and a selling point for the meat-snack-minded. Think of an old-school, pirate-themed seafood shack's lobster tank, but without the grimy water and all of the sad.

On Saturday, June 14, these beauties were hanging in the front row (from left to right): 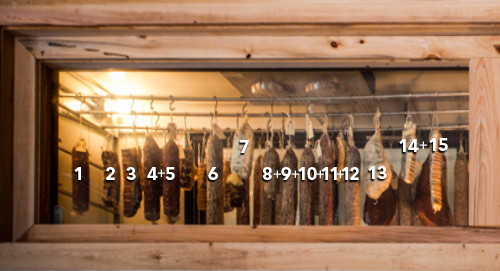 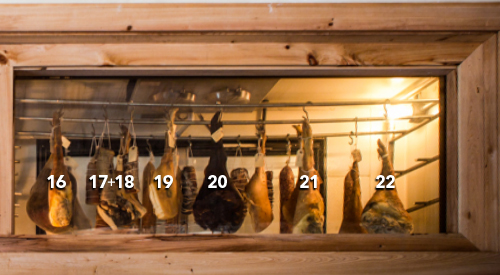 16. Prosciutto. Now we're getting into intact pig parts, in this case dry-cured ham.
17. Coppa.
18. Coppa
19. Ossabaw Prosciutto. More dry-cured ham, but this time from a heritage breed of hog known as Ossabaw. Edmund's Oast sources these babies from Revival Foods in Sylvania, GA, as well as Carolina Heritage Farms in Pamplico, SC.
20. Ossabaw Country Ham. Same hogs, different ham. Country ham gets a dose of smoke that prosciutto does not, and is generally presented with a thicker cut.
21. Ossabaw Prosciutto
22. Ossabaw Prosciutto