Share All sharing options for: Reflections on the Charleston Food Film Festival 2014

This past week marked the second year of the Food Film Festival in Charleston. The event kicked off with a showing of "The Kings of BBQ: Barbecue Kuwait" aboard the USS Yorktown and ended with the food cult favorite ramen burger making its premiere in the Lowcountry. Eater sent contributors Timmons Pettigrew and Erin Ziegler to the events to see what the evenings were all about.

Night One: The Kings of BBQ

Editor markup for Charleston Food Film Fesival, Timmons. This is only visible in the story editor.

· The long walk up the dock towards the USS Yorktown gave festival-goers an epic sense of scale to start off the evening. The sense of scale was immediately downsized on the trip up the tight corridors and staircases of the ship towards the deck.

· The sun setting over the city skyline was the star before the film. Breathtaking.

· "Kings of BBQ: Kuwait" started about 30 minutes late, which made for a hungry crowd that was extra susceptible to the impending food pr0n. Big ups to Airman First Class Sidney Manning for belting out the National Anthem before the show in front of the Color Guard.

· Passed samples of brisket, accompanied by a teensy biscuit and pickles, were cold by the time they reached the front row, but proved impressive nonetheless. Troops were fed on screen and cheered for on the deck. All in all, a great film in an incredible setting.

· As soon as the films were done, it was a mad dash to the buffet tables, where the Kings of BBQ were serving up brisket and roasted chicken they'd spent ten hours preparing on the dock below. Granted, the evening was getting late, and cold, but the brisket was a marvel of modern…brisketry. Sturdy, yet it would fall apart in your mouth in a perfect mess of fat and lean.

Written and reported by Timmons Pettigrew 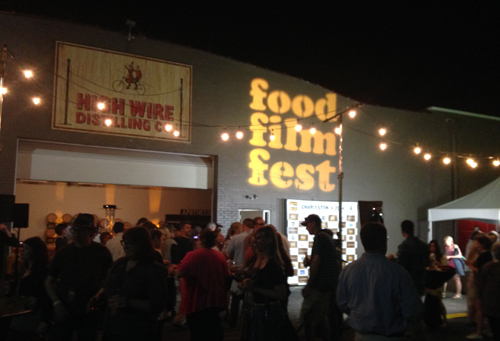 · The guy showing his butt crack in "How to Make a Turtle Burger" got the biggest laugh of the evening.

· The gentlemen sitting next to us were in awe of the seductive actress in "Paloma."

· The employees handing out the trays of samples were the most popular people that evening. By the end of the night, audience members had a Pavlovian response to the sound of the rolling carts of trays.

Editor markup for CHarleston Food Film Festival, Erin. This is only visible in the story editor.

· Get a seat close to the front. It pays to get to a food film festival early, especially when viewing Spanish-speaking jalapeño peppers, tomatoes and avocados with gambling problems and subtitles.

· Sponsored films can be sweet.

· A food film can be as short as 48 seconds and still incite wonder… and more importantly, hunger.

· A cookie composed of potato chips, coffee and butterscotch can be delicious. But really anything from Momofuku Milk Bar is probably delicious.

· Pour with vigor when you tip your next pint, so commandeth "The Pope of Foam", also known as Charlie Bamforth. And lose the bottle. It just clashes with the cocktail symphony.

· Be careful with Karl Palma's octopus balls. Crunchy on the outside and pancake batter-soft in the middle, Otafuku's takoyaki is perfect for an outdoor snack. And there's not much of a choice in the matter at the petite East Village spot. [Update: Palma is no longer associated with Otafuku, but he'll be putting up a Kickstarter for his own takoyaki grill at the end of May.]

· The food film festival is not about the food, according to director Kristoffer Brearton. It's about making people happy. How did they do? With a staff of over 30 producers, chefs, bartenders, servers, photographers, videographers and miscellaneous staff… perhaps it won't become typical Friday night entertainment just yet, but attendees walked away from the evening with smiles on their faces, fully stuffed with booze, snacks and culinary knowledge.

· Keizo Shimamato doesn't really eat many ramen burgers. "I'm too busy making them for you all."

· Is the ramen burger worth the wait? Maybe not for eight hours on a sunny Brooklyn Saturday morning, but the burger is quite tasty: a thin patty of high-quality beef cooked to medium enveloped in slick noodles (not mushy) that held their bun form adequately. The real secret was the shoyo ramen sauce and maybe the palpable excitement among the crowd as we lined up.

· Hankering to try a ramen burger but short the dough? Cronuts are valid currency for their savory counterpart at Smorgasburg Market, according to Shimamato. Stay tuned for more ramen burger pop ups in the future.

Written and reported by Erin Ziegler