Welcome to a special edition of Lifers, a feature in which Eater interviews the men and women who have worked in the pizza industry for over a decade. For Pizza Week 2014, Eater tracked down a few owners who have been with the same establishment for the better part of their career. Here, Eater chats with Michael Shemtov, Johnny Hudgins, and Josh Broome from Mellow Mushroom. 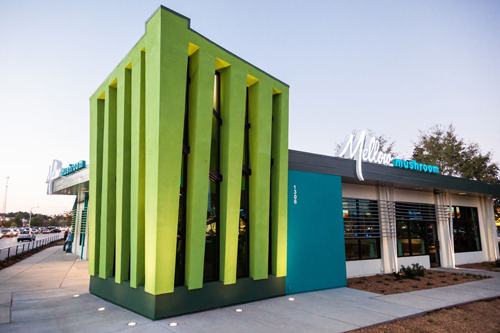 [Photo of the latest Mellow Mushroom in the Lowcountry: Provided]

Yes, there are Mellow Mushrooms in other states, but that doesn't mean the stores in our area aren't uniquely Lowcountry. Michael Shemtov, Johnny Hudgins, and Josh Broome have something of a pizza empire on their hands with outposts in downtown Charleston, West Ashley, and Summerville. At 13 years, their restaurant on King Street is one of the older institutions on the block. Eater sat down with the scions of pepperoni pie to discuss how they got here.

How did you guys come together?
Michael: Well, I went to high school with Johnny, and we were good friends. We're about four to five years older than Josh. I moved here in 1996 to go to the College of Charleston, and Johnny would come visit me. We were both familiar with Mellow Mushroom in suburban Atlanta, where we grew up. We talked about it, and in March of 2000, he moved here, and we started working on it full time.

We met Josh as we were opening up. I think we grew up as fans of Mellow Mushroom, and having lived here, and talking about what we would need and what was available, we were excited to open. We were also really excited to have someplace to go and have something really good to eat for about $10 a head. It was was either really low-end college food or Sermet's Corner and higher, back then. There was no place to go and feel good with table service.

How has this area of King Street changed since you came aboard?
Michael: We were just talking about that. What restaurants have been open on King Street longer than us?
Johnny: Old Towne and Gilroy's.
Michael: Was La Hacienda here after us?
Johnny: Yeah, that was a pizza place.
Michael: There's a lot less pizza on the street than there used to be. When we opened, there was Sharkey's right across the street, which was the local's favorite. It used to be Sharkey's and Andolini's.
Josh: I feel like in 2000, there were more shoe stores than restaurants, and now, I feel like, there's as many shoe stores as restaurants, and there's still a lot of shoe stores.
Michael: It think when we opened, in the early 2000s this was the bar district of Charleston. There were three or four really popular bars between here and Wentworth Street, and then they passed the 2:00 a.m. ordinance—when we opened, you could stay open til 4:00 a.m. or 5:00 a.m. if you wanted to.
Johnny: Those were long days.

You guys were open that late?
Johnny: Yeah and you didn't even need a key because when you went to leave at 6:00 a.m., there was someone coming in for the day shift.
Josh: I remember driving home—hair smelled like smoke and eyes were red from being up late—and seeing people on their morning jog as you're driving home.
Michael: This street definitely looked a lot different. It was a lot more vibrant at night. I think at some point that might cycle back and there'll be more night life down here.
Josh: In retrospect it seems kind of weird, that there was some sort of catalyst that took this from a college bar district to a high-end retail district. I don't know how that happened so quickly. Back then, it was just mom and pop, local stores, like Granny's Goodies. It's been interesting to watch.

How did you guys settle on this location?
Johnny: It was worth it, because it took a really long time to find it. Through the approval process, we thought we had the spot picked out, but when the powers that be showed up, they thought it was too small. We didn't know what to do. They left town, and we renewed our search to a little closer to where we are now, and we thought that was the spot. But they came in town and said, "No, this is a dump, you'll never be able to remodel it." So we were walking on this side of King Street and one of the guys saw this space available and peeked in the window here and said, "Hey guys, look at this place—it's ready to go." But we thought he said he didn't want two stories, to which he replied, "It's not two stories, it's a mezzanine." We got on the phone right then, and the landlord originally said, "Absolutely not, I would never rent my building to you," but it ended up working out.
Michael: He thought we were too young. It used to be a perfumery.
Josh: The House of Versailles?
Johnny: Yep, the House of Versailles, and it was an Amish Wrought Iron Gift shop before that.
Michael: We looked hard at the Rue de Jean spot before they went in there. That used to be a Houlihan's. We looked across the street and at King Street Grill and were Rarebit is.

What was the buzz surrounding your opening in a pre-Eater day?
Johnny: Back page of City Paper ads—that was the only way to get it done. We did make the mistake of putting huge blueprint size numbers in the windows counting down the days. That didn't work out so well.
Michael: There were several open houses. The reception was good.

What was the first year like?
Michael: The first couple months were crazy—we were just slammed.

When did you decided you needed to expand to your second store?
Johnny: Probably in the second year, but it took till year eight. Expansion is really challenging. We wanted to make sure we felt confident in this operation before we thought about expansion. We looked at a couple locations, and nothing was the right time or the right fit, and we kept rolling along here and waited for the right fit. Having gone through that gives you more confidence and it escalated more quickly. [Referencing opening MM Summerville shortly after MM Avondale]

Do you have any employees that have worked the entire 13 years?
Michael: Close, Chris [Jenkins], the head bartender has been here 12 years.
Josh: He started out as a busboy. A very good one.

In the thirteen years, have you tired of pizza?
Johnny: Everyday, I could it eat it everyday. All kinds. I love it all.
Josh: It's just a great classic American staple. There's always going to be competition or new restaurants that open up, but we can't go eat haute cuisine seven nights a week, so there's always room for comfort food like pizza to fall back on. Pizza and beer—it's a hard business model to screw up.
· Mellow Mushroom [Official]