Editor markup for Charleston Wine + Food 1. This is only visible in the story editor.

This year's BB&T Charleston Wine + Food Festival started a little soggy with chilly downpours and ended with a glorious bang of 72 degrees and sunny. The muddy fields of Marion Square didn't stop anyone from participating in the fun and festivities of the Culinary Village. Lowcountry chefs, like Mike Lata, Jeremiah Bacon, Aaron Lemieux, Benjamin Dennis, Craig Deihl, and more, showed guests the meaning of southern hospitality (sometimes that came in the form of a shot of bourbon). Brunches, lunches, Perfect Pairings, after-parties, and everything in between led to plenty of observations and photographs—check them out here.

• The fringe events started early, on last Wednesday, with a luncheon from Atlanta chef Anne Quatrano (Bacchanalia) at cantina Básico. Quatrano told the crowds, she wanted a "Nice, easy start to the Festival, with a picnic lunch."

• Le Creuset hosted Gramercy Tavern chef Michael Anthony for a drop-in/book signing last Thursday, and he couldn't be nicer. Anthony chatted it up with guest while explaining what he was cooking. The Ordinary's Mike Lata served oyster shooters for those that didn't need to worry about going back to the office that day. The accompanying entertainment's violin version of "Blurred Lines" was made even more entertaining with some vocal backup from Quintin Middleton of Middleton Made Knives.

• Hip Italian place Indaco was the location for the first after-party, and it was packed. Indigo Road employees like chef Jeremiah Schenzel (The Cocktail Club) and chef Jacob Huder (The Macintosh) mingled amongst visiting culinary minds like pitmaster Rodney Scott (Scott's Bar-B-Que) and chef John Currence (City Grocery). The Negronis were free flowing and the most popular guest of the evening had to be the whole-roasted goat with the gilded skull atop the bar. 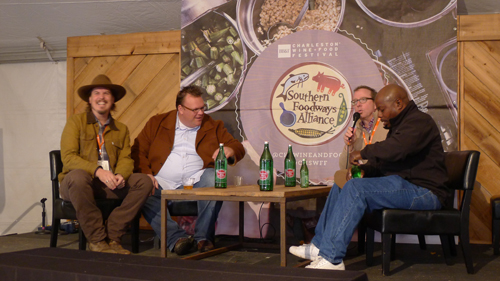 • Those looking to take a break from all the eating/drinking could pop by Culinary Hub for a Southern Foodways Alliance led lecture. At the panel discussion on "Whole Hog," LJ Woods farmer Bradley Taylor said, "We have fat pigs and lean cows," of his heritage breeds. Moderator John T. Edge asked pitmaster Rodney Scott if he made a fetish of the pork skins at his Hemingway, SC, restaurant.

• Founder/ former executive director of Wine +Food, Angel Postell, zoomed around town in a golf cart and was the envy of all. No one felt like walking much after their multi-course suppers.

• At the "Lambs and Clams" after-party at The Grocery, guests packed under the outdoor tent and everyone went home smelling like smoked meats. Weather celebrity Jim Cantore was in attendance—he's pretty much a legend after he kneed that kid on live television. Houston chef Chris Shepherd (Underbelly) was chatting up Julian Van Winkle and some bourbon was passed around.

• Rumors circulated that if you wanted to meet chef Sean Brock (McCrady's/Husk) you should hang at The Griffon late night.

Editor markup for Waffle House Smackdown. This is only visible in the story editor.

• "It's a Waffle House kind of crowd—they're still trying to pull it together," said Bon Appétit magazine's Andrew Knowlton of the audience at the Waffle House Smackdown. 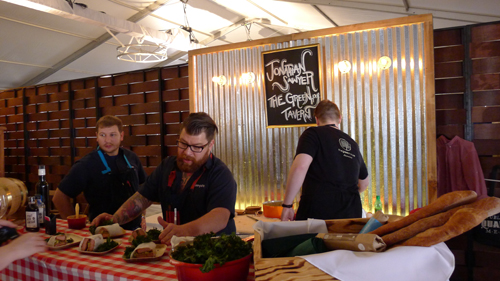 • The Greenhouse Tavern chef Jonathon Sawyer redefined the sandwich when he replaced the bread with two slabs of Mortadella for his offering at the "Sandwich Showcase."

• Saturday night ended with a big dance party at The Alley. DJ rDot had everyone on their feet. The most Instagramed guest at the party was indeed the "Boob Luge."

• The last event of the Festival, "Rigs, Pigs + Swigs," was a nice, laid-back end to the non-stop weekend of eating, drinking, and partying. The longest line at the event was for Atlanta's Fox Bros. Bar-B-Q's Frito pie and brisket. Rodney Scott's queue came in a close second with folks trying to get a bite of pulled pork over white bread. Charleston Magazine writer Jeff Allen helped Scott serve the barbecue.

• When you run out of Pappy, the Festival must be over.