Share All sharing options for: 82 Queen Celebrates 32 Years in Charleston

In 1982, long before Charleston earned a spot at the top of everyone's "must visit" list, fine dining faithful 82 Queen set up shop in the French Quarter. Today, they continue to pull in crowds with their award-winning She-crab soup and picturesque courtyard. The restaurant celebrates its 32nd anniversary this year—a rare milestone on the Peninsula. Eater sat down with founding partner Steve Kish and chief financial officer Jonathan Kish (also Steve's son) to talk about the hallowed grounds of the Southern eatery and what to expect in the future.

What were the initial thoughts behind opening a restaurant in Charleston?
Steve: My partners and I opened up this restaurant in 1982. I was a chef out at Seabrook, and one of my partners Harvey [Poole] was the food and beverage director out there. The other partner Joe Sliker pulled us all together. He had a place called Don Quixote's on King Street. That was 32 years ago. Don Quixote's was sort of a Mexican bar with tacos.

I didn't know Joe, but Harvey did. We teamed up with Joe, who was a popular Charlestonian—he was big in football and that's why everyone knew him. He played for Buffalo Bills, Florida State, and Moultrie High School.

He pulled us all together, and we bought this property. Then we opened 82 Queen. The name is the address because we couldn't figure out what the name should be. We had all kinds of names, but when we got close to the opening, we had to pick one—so the address was it. It could have been named Rhett Butler's.

We were one of the firsts to do Lowcountry food in town. Initially we called it "majestic cuisine." Sometime in the late '80s, the term Lowcountry started circulating.

Why was it important to do Lowcountry cuisine here?
Steve: We always used local seafood and local ingredients from farmers on Johns Island. We were using local before it became popular, and we wanted to have a Southern restaurant. My wife's grandparents were from here, and we got a lot of recipes from them. They always did things with shrimp and grits and crab, and we incorporated all of that.

In your 32 years, did you ever stray from that cuisine?
We've evolved here from fried seafood to classier food, but when we want to do something different, we opened a new restaurant. We had one in Summerville called Alexander Station, and we had an 82 Queen at Pawley's Island for a while, before [Hurricane] Hugo knocked it out. We had a steakhouse where Mercato is now—it was before its time. We also had a café on the corner here—82 Queen Café and Deli. We had five different things going on in the '80s.

What was this area like when you started?
Steve: Back in 1982 there were five white tablecloth restaurants in town—Chart House, Perdita's, Marianne's (which was French restaurant where Sticky Finger's is) there wasn't much going on. Henry's was a restaurant instead of a bar. We came in here and wanted to do something different.

When first opened, 82 Queen looked different. We had a raw bar in the back.The open air bar was very popular. We kept that going for ten years and then bars became unpopular for a while in the early nineties, with the formation of Mothers Against Drunk Driving and other organizations like that.

We opened with three bars. We had a front bar, a wine bar, and the raw bar. We decided to cut back to just one big bar. We turned the raw bar into a dining space, but we are thinking, very seriously, within the next year, about bringing the raw bar back. Everyone still talks about it. Old Charlestonians, like Tommy Baker, want us to bring it back. We'll see what happens to that.

Can you name some of your favorite evenings here?
Steve: That's tough—there's been so many. A lot of them have been our anniversary parties. We just had one. Two years ago, we had our 30th anniversary and we put out the word to all our alumni that they should come back. This place was absolutely packed with people who worked here in the past. That was a memorable evening. That was also the evening Joe Sliker retired. It was a bit of a retirement party. We had all they old time Charlestonian restaurant people, who are retired now, come out to the party.

Do you have a copy of the original menu? 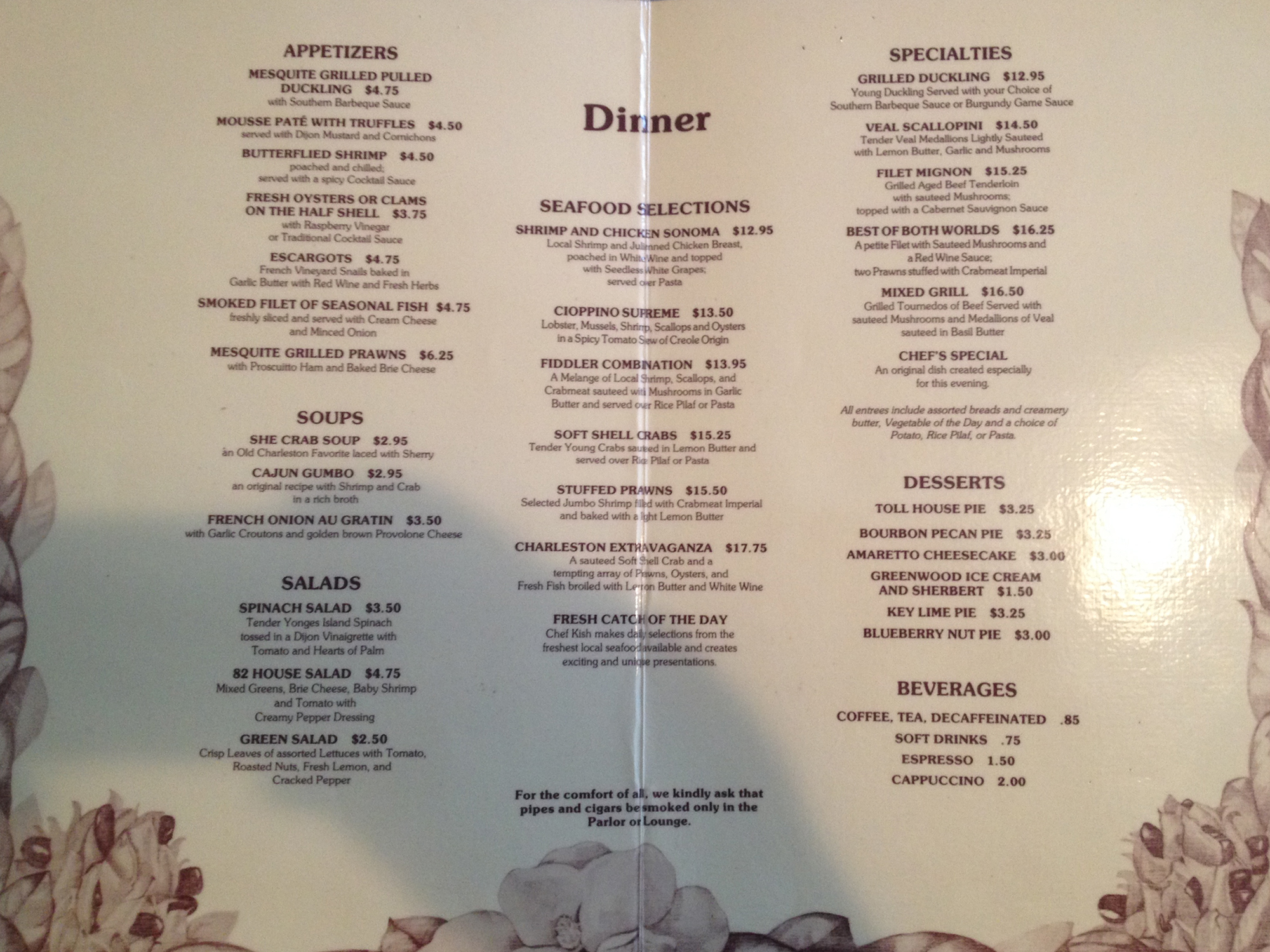 [82 Queen will announce new updates to their menu soon—hint, their famous She-Crab soup might get a facelift.]

Jonathan: … those are our core competitors. I look at what they do and what's expected of them and what's expected of us. We're on TripAdvisor, Yelp, Urbanspoon all the time, and I see that people expect us to be a fine dining restaurant. We are fortunate enough that we can be a fine dining restaurants and still do 300 covers. Not everybody can do that.

So, where we are taking the menu, is a fine dining experience that is scalable, and we can do 300 people in an evening. We used to do 400 in an evening, so we're looking to scale back and focus more on the quality of the experience.

Steve: There is so much competition in this city that we have to up our game a little bit. Over the past 32 years, we have constantly evolved. We're looking to constantly evolve and stay with the times. We never quit upgrading in our 32 years.
· Best She-crab Soup [CP]
· 82 Queen [Official]