Share All sharing options for: Start Your Beer Engine with Kudu's Jason Bell

When American drinkers think of beer on tap, they tend to think of kegs, the old familiar stainless steel cylinders full of force-carbonated goodness. American drinkers know, and love, said kegs. American drinkers also generally love beer that has carbon dioxide forced into it by default, because they love beer and that's just how it's produced here. While beer-savvy local bars strive for a solid tap list, and others go for length (sometimes at the expense of quality), a choice few incorporate another draft option entirely: cask ale.

Downtown stalwart Closed for Business may have been the first bar to permanently install a beer engine, which has been used to pour an occasional cask, but Kudu Coffee & Craft Beer is taking the focus to another level. Jason Bell, co-owner/manager along with his brother Josh, explained it all during a Sunday afternoon interview.

For folks that don't know, what's a beer engine?
A beer engine is a hand pump. It's a traditional way to serve ale from the UK—actually, I believe a Dutchman is the one that invented the beer engine when he moved to London. Basically, it's a hand pump with an airtight cylinder. As you pull the hand pump down, the cylinder lifts and it pulls beer from the cask into the line. We have quarter-pint pull, not a half-pint pull. An imperial pint is 20 ounces, and this one's made in the UK, so one pull gives you about five ounces of beer in the glass.

As a proprietor, how do you manage a cask versus how you would manage a "regular" keg?
That starts from the beginning. For the most part, we have to provide our own casks to the brewers. At this point we have five casks, we have two more on the way, and we'll probably end up with ten or fifteen. From what I've seen so far, that's what it's going to take to keep something on continuously, which is our goal.

I've been communicating with the local brewers, and everyone's been really generous with us and gracious, because it's not just your normal day-to-day thing to fill up a cask. We take one over and discuss what they want to do with it. We've had some great beers so far from Holy City, Westbrook, and Freehouse. We have more coming from Palmetto, and all those guys. More and more is coming.

Basically, beer goes to the brite tank after primary fermentation, and before it's force-carbonated they will pour some off into a cask. Then there are a couple different things you can do. You can add priming sugar to get the yeast to stay active and go into a secondary fermentation in the cask (cask conditioning). There's also adding a live wort from something they're brewing at that moment. So that will go in and start the secondary fermentation process.

When they seal the cask, it basically self-carbonates, or "cask conditions." Then they let it sit—usually for a couple weeks. The distributor picks it up, they bring it, and when it arrives we put it in place and we tap it. We tap it with a CaskWidge, which may be fairly new to the area. We can stand the cask upright and tap it, but it can still stay sealed, and we let it sit for 24 hours before we put it online to let the yeast settle.

It's a bit more labor intensive then your typical CO2 kegs, to do it right, but to me it's worth it. I enjoy it. I mean, I love CO2 kegs, I love those beers as well, but it's neat to see the difference. I don't think you realize it until you've had a true real ale, or cask ale, whatever you like to call it. There's a little less CO2 bite in it that you're use it in beer or even soft drinks. It doesn't really have that, it's a little more smooth. The hop notes and characteristics are still there. It offers a nice mouthfeel, as you guys can taste [Editor's Note: We could. –ETP]. It's just a little bit different from the CO2.

It [also] doesn't have the lifespan. The system we have set up, depending on the gravity of the beer we have about five to seven days. We obviously don't have a cellar here in Charleston, and we're a little bit limited on room. We do have it hard-lined into our kegerator. In England they try to serve it between 50 and 54 degrees. Maybe if you come here and get cask ale, let it sit 10 minutes and come up in temperature to really let the fullness of the flavors and aromas come out. 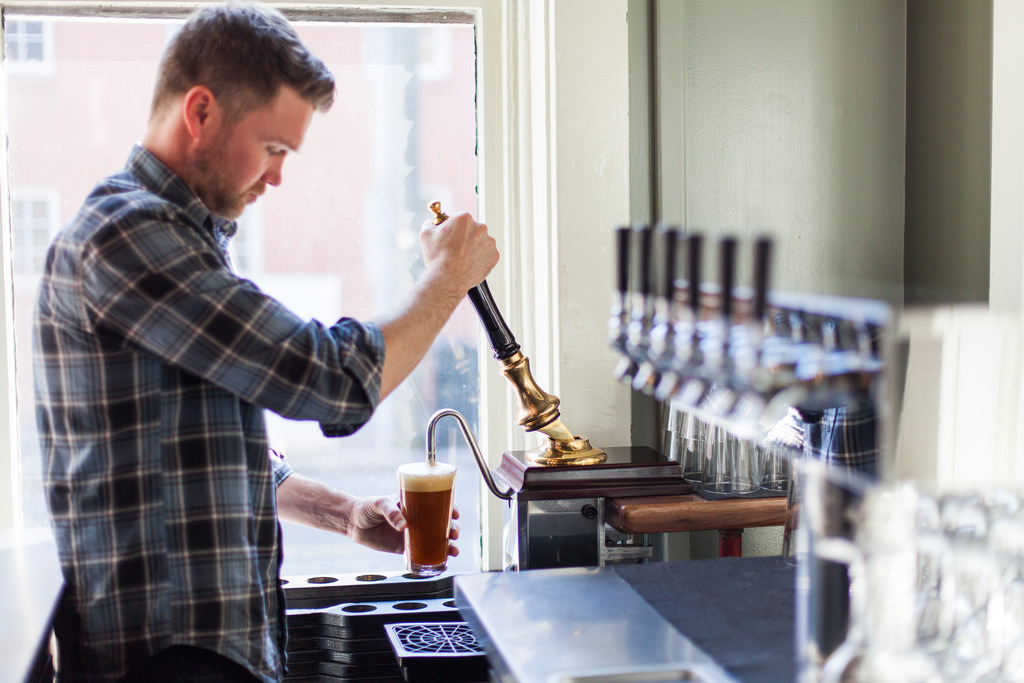 Why invest the time and money in this specific thing, when most everyone else in the country does regular CO2 kegs and not casks?
My in-laws live in England, and I've been going over there since 2009 and developing a relationship with those guys, one of the local pub owners specifically, Nigel Williams from The Ranmoor Inn in Sheffield. He's been in the business a long time, for decades. I got a cellar tour this last time in December, in his pub. Just going over the cellarmanship, the craft it is to even carry these kinds of beers and do it well, and be known in England for doing it well [is awesome].

So, since 2009 I've been going over drinking real ale. My father-in-law is just a big real ale guy, he loves it and is very passionate about it. So I just really enjoy it, and I thought it would be cool for us as a business.

The market there is very sessionable beer. A lot of the real ales brewed at the local breweries are usually going to be be 3.5, 4, 4.5 percent, and that's their market right now. I toured Thornbridge Brewery when I was over there in December and they were doing some amazing stuff like sour brown ales and all kinds of things. But, they're also sticking to the traditional, sessionable 3.5-4 percent beers over there.

The revival here right now, the last 20 years, is the craft beer experience with the small brewers making a name for themselves. Over there it's the same thing, this real ale revival, where even this younger generation is taking hold of what maybe t heir dads or granddads drank. They're having real ale instead of some bigger name-brand beer offered over there in the pubs. To combine both markets and both revivals I thought would be a neat experience for us here, and for our customers.

We're going to carry some of the flagship beers here locally. We have pale ale from Palmetto coming. We're not trying to do everything super high gravity. We're going One Claw Rye, Pluff Mud Porter, a bit of everything on there, but we also have a 12% stout coming up too. We're trying to do the whole range of different styles and ABVs. 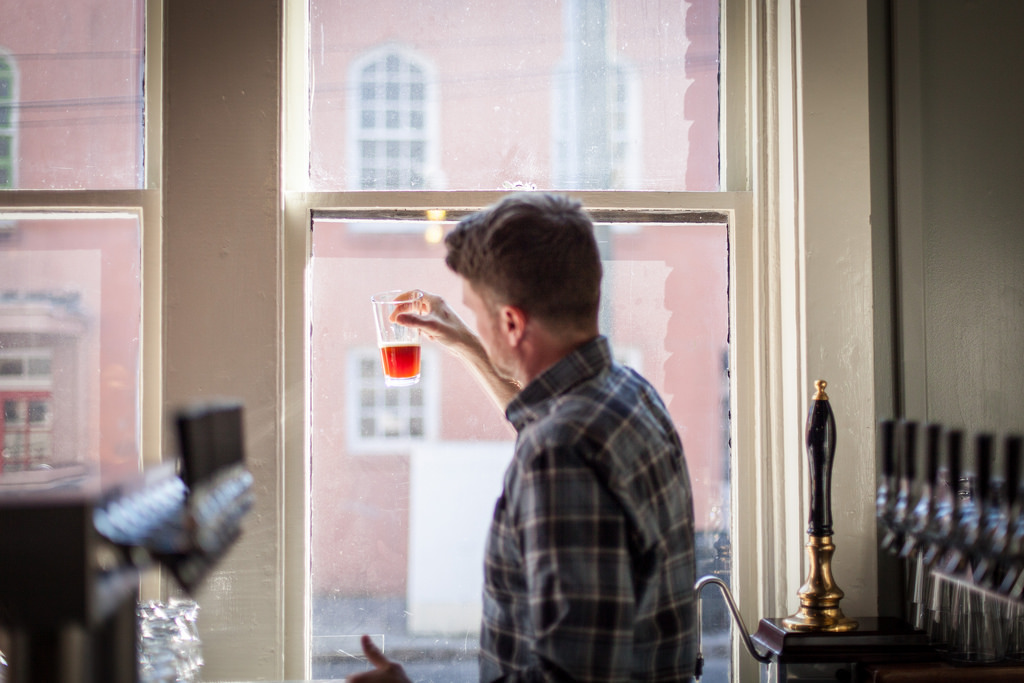 Do you have a cask on all the time now?
That was originally the plan, that's why I got five barrels. What I learned very quickly was that you need a lot more barrels. Just the situation with the brewers, obviously you have to fit around that schedule of which beer they're brewing, which beer you want in and which one they're willing to give. Working around that has created a bit more downtime than we hoped. We are going to have cask on all the time. In the next month I hope to do that.

The local brewers have been extremely gracious with me coming over, and they seem to be pretty excited about it. They're doing some really cool stuff for us. We're going to have it on all the time but maybe a couple weeks down the road. That is the plan, and it's selling to the point where we can do that. With that, we have a lot of learning to do and a lot of training for our staff. I'm trying to learn as much as I can about cellarmanship, and really handling the beer correctly and making the brewers proud, making our customer proud, and making out staff proud about what we're serving out of the cask.

Any cask events coming up that people should look out for in the next month or two?
We don't have a cask event coming up, necessarily. We have an event the night before Brewvival, the 21st of February, and we do have a surprise cask coming out for that. It will be up on our social media. It's going to be a pretty amazing experience, I think.

All of our local brewers are just providing amazing stuff. We have Gentle Mongoose on right now. It's a 6.9% hoppy red ale form Holy City that Chris [Brown] provided for us. The boys at Westbrook are providing their IPA on oak spirals and a bag of hops that will be here in another week or two. It seems like they're even getting excited about experimenting with it and doing some fun stuff with it. As it grows, as we get more casks, we can get in the flow of it and do some more events. Right now though, we're selling through it like we need to so it's not getting old.

The cool thing about cask is that, each day I come in, it changes a little bit. It changes, develops, and matures. It's a lot of fun to taste and experience. It's a craft beer adventure, for sure, with real ale.