Welcome to a special Cocktail Week edition of Lifers, a feature in which Eater interviews the men and women who have worked in the restaurant and bar industry for the better part of their lives, sharing their stories and more.

Share All sharing options for: Moe's Crosstown Barkeep Greer Farrell Wrote the Book on What it's Like To Deal With Drunks

For a while, Moe's Crosstown Tavern embraced their "good time on the bad side of town" reputation, but after over a decade of Tuesday Burger Nights, a facelift, and a staff who loves working there, it's become the sort of dive bar guests can feel satisfied visiting with their grandmother in tow. To regular patrons of the watering hole, bartender Greer Farrell needs no introduction. Farrell has served shots and beers at Moe's for almost 13 years. She's seen so many stories in her time, she wrote a book Standing Up Together about her tenure at the dive. Interested readers should pick up a copy, if only to experience the tale of "Accidental Shot of Puke."

Here, Farrell tells Eater Charleston about the inspiration for her writing, what imbibers can do to get kicked Moe's, and why she's relieved to finally see food and beverage workers get the respect they deserve.

What was your first bartending job?
I bartended in New York at a place called the Blue Plate. It's a great restaurant, and I lived above it. I loved bartending there. My friend was leaving — she was one of my best friends since we were five, so she trained me. She taught me how to make a Martini, and I've never made a Martini different. No matter how someone orders it, I make it the same, and no one's ever complained. People ask for a dry Martini or this or that, and I still make it the same.

I came to Charleston, because I wanted to study crime in the South. After a year of working at Tommy Condon's, I was going into Moe's and thought, "I want to work at this bar." I pestered Mike [Tronoski] for two weeks, and that was 13 years ago. I like the stability and the money and the flexibility of my schedule. I can go to school, or do whatever I want.

What was that first year at Moe's like?
I look back, and the business, as a whole, is so completely different than it is now. Like then, on a good day shift you'd make $60, and now there's so much business we have two people on. It's grown so much. Our busiest night used to be Tuesday for Burger Night, and then it would die off. This past brunch was obscene. Moe's is odd because Friday and Saturday will be good, and then some Fridays and Saturdays will be dead, and then we kill it on a Monday.

What was it like working in a smoking bar?
It was awful. But it was so normal. I was telling one of the newer girls that when you took a break, you would stand at the bar, smoke a butt, wash your hands, and then make people drinks while your breathed your stinky cigarette breath on them.

Did you have any reservations about working at Moe's?
No. The neighborhood protects it. I've never been bothered there more than anywhere else around town. I mostly worry about stupid kids, but that's everywhere too. I never felt uncomfortable.

Do you think the reason it has become more busy is because of all the young professionals moving there?
I think that the Wagener Terrace and North Central neighborhoods have come up in popularity, but Moe's has all different people in it: young, old, everybody.

Where there any changes after the reopening [Moe's closed for a year to renovate the interiors]?
Not really. We're probably even busier. It's so much nicer now. You can actually bring your parents in there. It's no longer like, "It's a shit hole, and it's awesome because it's a shit hole." It's actually nice. All of us have been there forever. Frank [Cinnante]'s been there a year more than me and Pat [McGuigen] a year less. Everybody else is going on around eight years.

I hardly ever wait on a stranger. I get to talk with a lot with people getting off work from

I hardly ever wait on a stranger.

downtown places and coming to Moe's. It's such a symbiotic relationship, because the nice restaurants downtown want to get the eff out of downtown and come to Moe's. When they're busy, we make good money, and when we make good money, we go eat at their places. I think as Charleston has risen in the food and beverage world, every single place has become exponentially busier.

In that first year, was there a popular drink you don't see much of anymore?
Grand Ma [Grand Marnier]. People who drink Grand Ma order Grand Ma, but we used to blow through multiple bottles a night. And now everyone shoots Fireball.

What I find interesting about this town, is that you learn so much about food and drinks, that even though I would never call myself a mixologist, I still know all the classics, but you learn so much through osmosis. When we hire someone they have to know how to make a cosmo or a Martini, but now they need to know Old Fashioneds and Negronis. I don't think you can live in this town and not know how to make some drinks or cook some food. 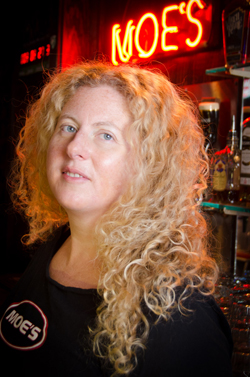 Is Moe's, for the most part, still a beer and a shot bar or are you having to mix up cocktails?
I would say we're not mixing up a lot of cocktails, but we do have a really good, extensive beer list now and are changing beers on tap almost daily. That's something new to Moe's and I think all around town, people are paying attention to their draft list. It's really nice to have local products. We have the Striped Pig vodka, and that sells really well. I like to push the local products. That's huge. I met a guy at a bar, and he was a scientist for the Navy. I asked him, "As an individual, what's the best thing you can do for the environment?" He said that the best thing you can do is buy all your stuff local so they don't have to drive it to you. If you bought everything at the farmers' market and used local products, it would have a huge impact on the environment.

Did you always know you wanted to write a book?
I have hundreds of stories written, but the book I had to tighten up — there's so much more I could have added. Like most bars, we have a log book. It's an FYI for the fellow servers and bartenders and a log of behavior. If you get blackout drunk and are rude to me, I need to let others know. I would get home and type up some of these stories. When Moe's closed [for renovations], I got all our log books and that helped.

So many momances happen in there, and now they're married.

I love that bar. I love our clientele. It's a great mix of all different people. We call them "momances." So many momances happen in there, and they're now married. One of my best friends met her husband at Moe's. I looked over and they both have big, loud mouths, and I thought it was weird that they didn't know each other. They met at that moment, and now they are married.

Have you ever wanted to play matchmaker?
No, I stay out of that. I see people meet though, and I think, "Are you kidding me? You guys don't already know each other?"

When you're hiring new people, what are you looking for?
Well, you can't be a doormat, and you have to work your ass off.

It's hard sometimes though. I'm from New York, and I'm a little more direct. And you might get a bad wrap, but people have to remember, unlike other jobs, your clientele are intoxicated. I always say, what a bartender should do for a customer, because you never know what kind of day they've had when they come in, happy, sad or awful, you put your own shit aside. Well, what I ask of my regular clientele, is do the same for me. You can't come in and smack my ass at midnight because we're buddies: 1.) because you shouldn't do that at my job, and 2.) you don't know what sort of night i've had. I tore these girls heads off, because they turned up the music once, and so much had gone wrong that night, and then they came in and turned the music up. I lost it on them.

Where do you hang out when you're not working.
I love Barsa. I like Local 616. I like going where my friends work, like Edmund's Oast and FIG. I don't go out partying. I go out and have dinner. I like the Belmont. I like ambiance more than scene. My favorite bar in town was Raval. I would go there at 5:00, in the afternoon, and it was cold and dark, and I liked to sit in corner unnoticed. It was a perfect place. I've been looking for something since and haven't found it.

I think it's hard as a bartender, because it drives me crazy that servers can get walked

Tip your bartender. Take pride in what you do.

on, but bartenders are allowed to stand up for themselves. In this day and age, you have a job and while you're working, you should be treated with respect. It's just that simple. It's a smaller percentage now, but there was a time that people thought they were entitled to treat you like shit because they're paying you. I get people who are real rude sometimes, but it's not like it was before. I do think in the food and beverage world, managers should stand up for servers, people shouldn't be belittled and put down because you're in the service industry. I think that concept has gone away.

What's the biggest offense that will get you kicked out of Moe's?
If you take your fucking clothes off.

Does that happen a lot?
Yes, it does. It happens with dudes randomly. I kick people out if I cut them off and they try to sneak a drink. We don't kick a lot of people out.

Any parting words of wisdom?
Tip your bartender. Take pride in what you do. The most noble job is any job where you can take care of your family. I do other things to feed my brain, but with my job, I can take care of my family if anything happens.