Welcome to a special Cocktail Week edition of Lifers, a feature in which Eater interviews the men and women who have worked in the restaurant and bar industry for the better part of their lives, sharing their stories and more.

Home of midnight cheese fries A.C.'s Bar & Grill was a bit of a pioneer on Upper King. A fire forced the dive bar to move from 338 King St. to its current location above Calhoun Street, and for a while, it was one of the only evening businesses on their stretch of the street. The bar adapted to the shifting closing times (remember when you could walk out of A.C.'s as the sun came up?), the ban on smoking in restaurants, and the repeal of mini bottles. It persevered as a bar to grab a cheap beer and late night food in a no frills atmosphere.

Bartender Kevin Young started as a bar-back and eventually moved up to his current position. As you can imagine, A.C.'s is an interesting place to work — if you've ever watched the cast of characters coming and going through the doors of 467 King St., you can imagine the mayhem inside once everyone gets a few Jägerbombs in them. Young helped bring brunch themes to the forefront of every hungover soul's thoughts on Sundays and thinks that, maybe, just maybe, he helped cultivate the culture of dancing on tables at the dive bar.

What was your first bartending gig?
A.C.'s. I never bartended anywhere else.

How did you convince them to let you get behind the bar?
I didn't. That's the thing. I was a bar-back. I was pissing and moaning about how tired I was of being a bar-back and cleaning puke and picking turds up off of the floor, so my ex, Leigh Ann [Gobel] said, "Why don't you start bartending?" At the time, I didn't think I wanted to bartend because I didn't want to get stuck in that rat race or whatever. But I remember she and Eric [Rickert] got me the job. Jim [Curley] has always been good to me. He has had reasons to let me go, and he has had reasons to let a lot of people go, but he's kept them on. He's rather conservative, so it's weird he hasn't ixnayed the lot of us, but he has a good heart.

When I started bartending, people could still smoke in bars. All my regulars ended up transferring over to the Rec Room because they can smoke over there [Recovery Room has designated outdoor areas for smoking where patrons can bring their beverage with them]. We thought, "Oh shit, once that ban kicks in, we're going to lose all our business." We didn't. We held on. That's when Jim really started pushing the kitchen. We needed to make up for what we were going to be losing, since not everyone wants to leave their beer to go outside and smoke.

What year did you start?
I started there in 1998 or 1999, but I had a job as delivery guy, and I worked for a videographer, so it was one of my many side jobs. At one time, I completely quit and did deliveries. After the place I worked for folded, I wrote for Post and Courier, so I had a little bit of money. This is when their supplement was called Preview Extreme, so that really dates it. I ended going back to Jim, and he let me have my bar-back job. This was still when we were open till 5:00 a.m. or 6:00 a.m. Basically, I'd get done and walk to my car as people were on their morning run. You felt awesome and worthless at the same time. I started bartending around 2004. I didn't start doing the brunch thing until 2008.

I also remember playing Golden Girls that year...Do you remember what the first year was like?
Yeah, it was really weird because there were still CD players, and that's the thing that stays with me from that year. I would make CDs for the bar. I would have to go through all my music and find something I could actually play in the bar. I like rap music a lot, but I can't play a majority of it. I started bringing in 70s music and 80s soul.

I also remember slowly learning all the regulars' names.

I also remember playing Golden Girls that year and somebody yelled, "This ain't no goddamn gay bar," so I had to turn it off. [ed. note A.C.'s has shown Golden Girls since, without a problem.] 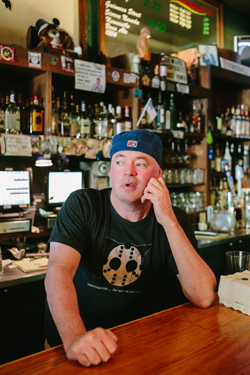 How has the clientele changed over the years?
It's changed, but at the same time it hasn't. Boston [Chris "Boston" DiMattia, owner of Recovery Room] gets a lot of what we had. We had a gamut of people. You'd have someone who was freshly 21 and someone in their mid-60s or a barfly. It was not uncommon to have construction workers, college students, and law school kids. It was really cool because we had all these different types of people. It was also before King Street became what it is now. That's what I remember about the clientele then.

I remember going into the bar myself and saying "A.C.'s has changed," but then I remember perspective changes with age. You realize that your thinking and viewpoint has changed. Whereas it used to be kick-ass to stand on the table and dance, all of a sudden, it's like, "God, can you have some sort of class?" I have people in there, in their early 30s, that will bitch about how rude everyone is, but I say, "You sound exactly like what you don't want to be."

What was the popular drink when you started?
I remember that first year, I had to make a lot of cosmos because of fucking Sex and the City. I remember I had to make so, so many of those. The first time I had to make a Manhattan, I was so nervous. Actually, this is the ultimate in stupidity or nervousness — I don't know, but someone ordered a bourbon and Coke, and I said, "Ok what is that?" I really meant it too. I wasn't trying to be funny, and the girl said, "You know, like bourbon ... and ... Coke. You put bourbon in the coke."  I poured it and had to ask her if it was ok. "There's a lot of liquor in here, but it's fine," she said. After that, it was just a lot of cosmos — I was really good at making them.

... I had to make a lot of cosmos because of fucking Sex and the City.

Other than that, it was always bourbon and ginger, kamikazes, Jägerbombs. Over there, Maker's Mark and Grand Ma [Grand Marnier] were the shots. It didn't go away, but it's definitely nowhere near where Fernet or Jägerbombs are now. You see a lot of products that get big and then disappear, and it's the same with beers. When's the last time you saw someone order a Mich Ultra?

Is there a drink you hate to make?
When the customer feels they need to be ritzy, when you're obviously not in a ritzy place.

What's the best part about working at A.C.'s?
When everything happened with Wall Street, my money never took a nosedive. I never had to worry. When you have happiness or depression, you can still make money with alcohol. It's so damn true. There would be slightly leaner days, but I didn't see much of a change. A.C.'s has kept me paid — I was able to put money into owning an apartment. I have a boss who's been pretty good to me.

I also love doing brunch, that was a great way for me to be creative. I did the video stuff, the signs on the doors, and the music. I got the idea, and they said I could do it, but they weren't going to pay me extra. I still wanted to do it though. We always have a theme, so why not play it up a little bit? Saturdays were spent putting together videos, mixes of music, and finding pictures to put on the front door. The themes were something that Leigh Anne and I started doing. One of the first ones was The Simpsons. We had yellow menus and some crazy specials.

... and this goes against my beliefs, but it may have been an MC Hammer song

Do you remember a particularly good or bad night?
A really awesome night would probably be the first time I ever drank. Me and a friend went to see Wedding Crashers together, and we came in on a Saturday night. I made a point to never go in there. I never go in there if I'm off. We go in, and we're sitting down and chatting, and we're both going through breakups, so we have a lot to commiserate about. She liked rap a lot, and she was really good at dancing to rap music. I remember some song came on, and I think it might have been Kid 'n Play or, and this goes against my beliefs, but it may have been an MC Hammer song. I remember we got on the table and started dancing. From what I understand, and I could be way wrong, but I think I was one of the first people to ever do that at that bar — the first guy at that bar to dance on a table. That was really cool, because her and I were doing the running man off of the table and really having fun. That was something I never remember hearing about, but now on a random Saturday, you'll see mounds of people dancing on the tables. Jim would wave a flashlight around. He didn't necessarily encourage it, but he didn't exactly say no. That was always a good memory, but that was more as a customer.

Have you had to kick anyone out?
I've had to kick people out. The best one, was when a Cambodian woman came in with her, maybe boyfriend, or paid boyfriend? They were talking, and she didn't speak English, and he didn't speak her language, so they weren't communicating very well. Finally, she gave him the hand — this was long enough ago that "talk to the hand" was still a thing — and he left.

She goes to the bathroom and comes back out in a nighty and was looking at me and started hitting on me. This sounds like something out of Penthouse Forum. Because of the language barrier, I was making hand gestures that she had to put some clothes on. I eventually had to call the cops. She was fun though, because she made my day a lot more interesting.

When he's not at A.C.'s Bar & Grill, you can find Kevin Young DJing at local pubs, such as Big John's Tavern, or plotting scripts for the most epic cat video to ever hit the internet.