Running the Numbers on The Ordinary

Share All sharing options for: Running the Numbers on The Ordinary

When co-owners of The Ordinary, Mike Lata and Adam Nemirow, first imagined opening an oyster place, the idea was to stay small. They originally looked at the tiny storefront that is now all-day diner Eli's Table for their raw bar spot. The thought was to stay in close proximity to their first restaurant FIG. Lata and Nemirow changed their minds when the converted bank space, which they currently inhabit, fell into their hands. With a bigger building, came some substantial numbers. Chef Lata never expected the place to be as popular as they were, but before they even opened, fashion magazine Vogue declared them a "must see" in Charleston, and the accolades haven't stopped. Take a gander at the numbers coming out of The Ordinary.

1. The conversion of the 1927 bank to a restaurant left the address with 23 feet high ceilings, 2860 square feet of space downstairs and an extra 661 square feet in the mezzanine.

2. The Ordinary can seat 90 patrons in the dining room, six at the raw bar and 20 at the drink counter.

3. A massive 3500-3750 oysters are served on the half shell during a normal week. This averages to 660 pounds of bivalves consumed every seven days from regions along the Atlantic Ocean reaching from South Carolina to Nova Scotia.

4. The artisan preparing your plate can shuck a dozen in under two minutes. Some shells may take more time, but he's pretty handy with a knife.

5. Along with those mollusks, three to four gallons of mignonette are served with the raw bar orders each week.

6. Shellfish on the half-shell should be served on ice, and The Ordinary goes through an average of two-hundred and eighty pounds each night.

7. The biggest fish to come through the kitchen was a 55 pound wahoo, and they nearly sold out in a single service.

8. The seafood tower envy of Charleston serves 200 lobsters a week. Lata didn't think the lobster roll would be a hit, but as a "displaced Yankee," he felt the need for the familiar comfort food in the Lowcountry. He found it appealing that the crustacean is a yearlong sustainable resource, so it could always be on the menu, but Lata warned "get it while you can," because he tends to rotate popular items.

9. By the glass, the classic oyster pairing of Sancerre is the most popular. The bar will pour more than 30 bottles per week.

10. The number of times a fried mollusk nestled in a buttery Hawaiian roll were Instagrammed this year was probably in the thousands—Lata said The Ordinary sends out 400 sliders a week, which averages to 10-13 an hour. He also confessed to eating a few of the tasty snacks during his shifts. Who could resist?

11. The smallest number on this list is one—that is the number of lobsters seen wearing top hats in the restaurant. See below. 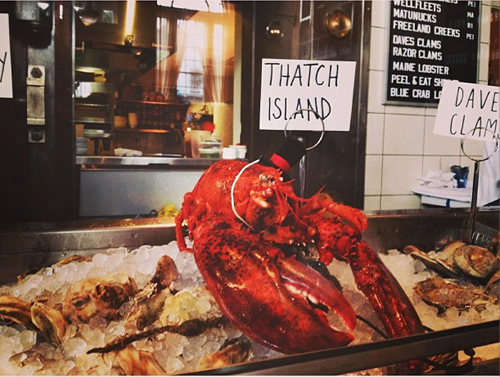 [The only thing missing is a monocle.]
· The Ordinary [-ECHS-]
· A Night Out in Charleston [Vogue]