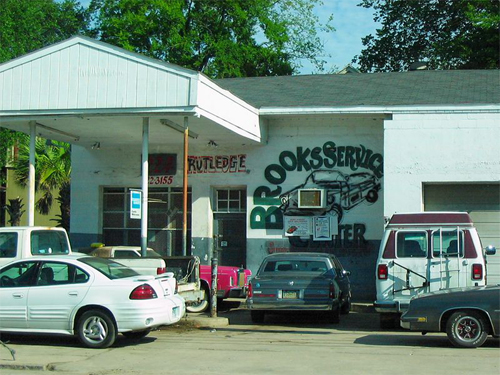 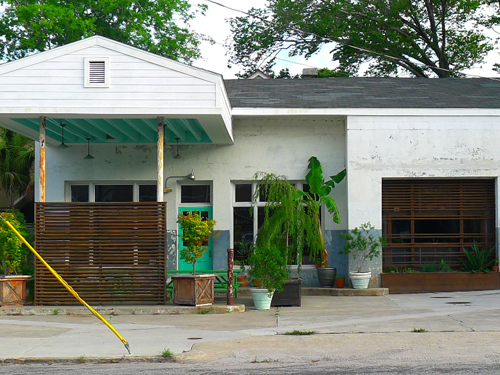 Though their cuisines may vary, downtown's Xiao Bao Biscuit and Rutledge Cab Company are both housed in old Exxon stations and featured on Bon Appetit's list of "16 Great Restaurants in Old or Still-Functioning Gas Stations." While Charleston restaurants continue to rack up the accolades, here's a look at how each eatery went from gas pumps to gourmet menus.

After it was a Exxon station and before it became the go-to Asian comfort food site, Xiao Bao Biscuit's address was home to Brooks Service Station. Broken-down vehicles and attendants in coveralls once crowded the space that is now a peaceful patio with bright green picnic tables. The old graffiti was covered with a mural by local artist David Boatwright (his work can also be spotted on the side of the Hominy Grill building or the GrowFood Carolina warehouse).

XBB embraced the industrial feel of the building and left a pared down metal and wood finish for their interior. The minimal design allows for patrons to direct their focus on the dishes and whether or not to order a second helping of okonomiyaki (the answer is yes). 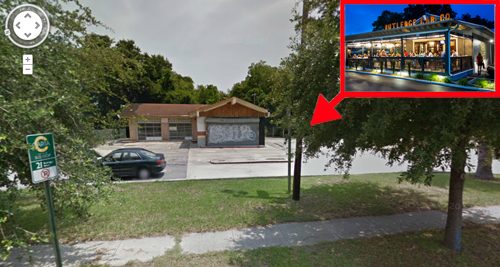 Way up on the neck of the peninsula, 1300 Rutledge Avenue was a ruined site before chef Bob Carter's team took over. Graffiti, shady characters and a deteriorating exterior were the previous inhabitants of this now-bustling corner. The structure of the old Exxon station is perceivable, but Rutledge Cab Company took care to polish the building to a shiny new finish. Mahogany wood and leather booths fill the interior, and an expansive patio transforms the once-ugly exterior. The diner menu and boozy milkshakes attract a downtown crowd at all hours.