Share All sharing options for: Anatomy of an Icon: Mike's Famous Duck Club at Tattooed Moose

As part of Greasy Spoons Week, Eater Contributor Erin Ziegler reports Mike's Famous Duck Club at Tattooed Moose for this edition of Anatomy of an Icon. 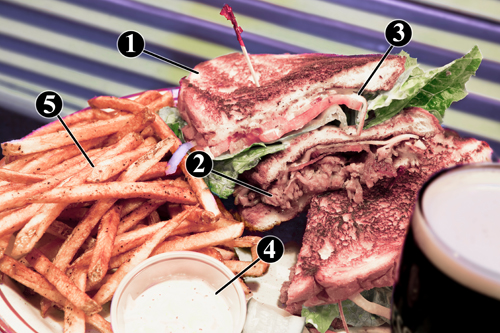 The creation of Mike's Famous Duck Club was sort of a happy accident, according to Tattooed Moose co-owner Mike Kulick. During a stint of brunch service at Avondale's Voodoo Bar and Tiki Lounge, Kulick and his kitchen crew were messing around with a few slices of King's Hawaiian bread, a signature element of Voodoo's French toast.

With a pantry full of ingredients for barbecue duck tacos and some extra bacon and cheddar, Kulick began dreaming of the ultimate club sandwich one fateful Sunday morning. After adding a little mayo, lettuce and tomato, Kulick knew that he had something -- "a great counterpoint of flavors," he says. The sandwich came together with the right ingredients at the right time and really hit its stride at Kulick's popular but short-lived Cajun-Creole joint, Marie Laveau's.

The now-famous duck club was on the menu when the Kulick's opened the Tattooed Moose on Morrison Drive in March 2010 and led the charge in redeveloping the deli-focused menu that December. Then the Food Network's bleached-out Guy Fieri visited, and now the duck club boasts in-house rivals in the Moose Burger and the Lucky #1 Sub. But Kulick has remained true to the triple-layered duck-centric deliciousness that bears his name. "I love it. I love that sandwich."

1. The Bread
Three pieces of King's Original Hawaiian Sweet Sliced Bread are toasted as the crispy, sweet framework of Mike's Famous Duck Club. The natural sweetness of the bread pairs perfectly with the deep flavor of the duck, savory peppered bacon and smoked cheddar.

Because Hawaiian bread has so much sugar, it burns easily. "It's all about timing," Kulick explains. The bread can go from toasty and tasty to scorched in the blink of an eye. Kulick and his Moose crew have bread thickness and grill time down to a science. Each Hawaiian loaf affords nine slices of bread for three triple-layer sandwiches.

2. The Confit
Kulick is simple and traditional in his duck confit preparation, brining duck legs and thighs overnight and then roasting the brined meat with fresh thyme and duck fat prior to serving. "It's simple, but precise," he says. "You can't go wrong with duck; its richness really takes this sandwich over the top."

3. The Toppings
Kulick included all of the trappings of a club sandwich, with a smoky twist. Apple-smoked bacon and hickory-smoked cheddar stand up to the richness of the confit, without dominating the brined and roasted fowl or the sweetness of the Hawaiian bread. Lettuce, tomato and red onion round out the duck club, and provide some chill and general sandwich stability.

4. The Sauce
The garlic aioli includes lime juice, as opposed to the usual lemon, which gives the mayo-based sauce the authority to cut through the multi-layered essence of the duck confit. The aioli is slathered on each of the three Hawaiian bred layers for just enough tang. The only thing missing from your taste buds is the bitter, which is where the beer comes into play.

5. The Fries
Each club comes with a side of duck fat fries, which are often mingle with chunks of fallen duck or dipped in the aioli. As for how to eat it? "You can't leave anything out of the first bite," Kulick cautions. "It's the most important." But after that initial mouthful, there are no rules.

Written and reported by Erin Ziegler