A Dramatic Look Back at Two and Half Years of Husk

Share All sharing options for: A Dramatic Look Back at Two and Half Years of Husk

Charleston, these are the very last moments of claiming the world's only operating Husk. Tonight, 549 miles away from the original "celebration of Southern ingredients," Sean Brock and the Neighborhood Dining Group's Husk Nashville will open, yanking the limelight off the Holy City, if only for an evening. Over in Tennessee, they'll have a Husk with a guitar in its logo in place of the shovel, hot chicken on the menu (perhaps) and a slew of their own approved Southern providers, like the Chattanooga-based soda purveyors Double-Cola.

In November 2010, when Husk started serving, the Post and Courier reported the inaugural evening was "smooth as silk." Brock was coming off a recent James Beard victory for best chef Southeast, and he told the paper, "I wake up nervous every day. Nervous is good. Nervous means you're alert."

A nervous Brock translates into a successful one, the world would soon learn. The avalanche of praise came swiftly after that much-hyped first night, with Brock launching to celebrity status and lots talk about the Importance of Husk. Here's how it all went down:

Nov. 8, 2010: The Beginning Husk aims to serve 150 on their first night, and Brock is worried they're being "ambitious." Here's the menu from the evening, complete with nods to the chef's Tennessee ties: 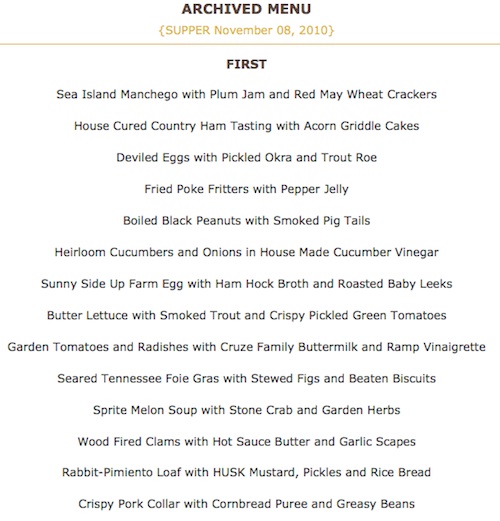 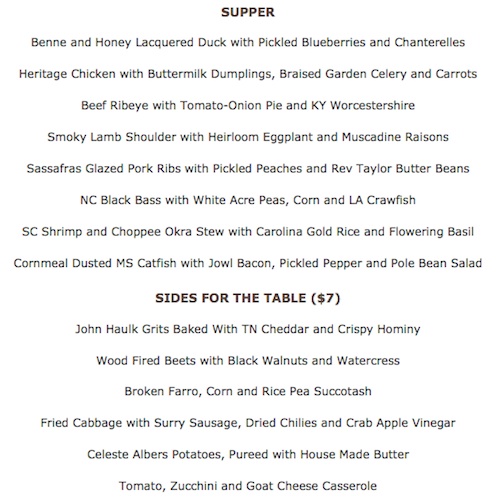 Dec. 29, 2010: Cheers to the Bar In the very early days, the cocktail program was pulling in much of the press. Over at T Magazine, they note, "Exquisite small-batch varieties are served in glasses made from recycled wine bottles, each with a "punt" in the bottom, which creates a kind of "moat" for the amber liquid." With the kicker, "It's a pretty neat experience." [T Magazine]

Jan. 12, 2011: A Look at Husk's Core City Paper's Robert Moss cuts through the hype and the fried chicken skins, but ultimately decides, "For me, the final judgment comes down to this: Each time I've gone home after a meal at Husk, I couldn't stop thinking about the food and — despite having put away a full array of appetizers, entrées, desserts, and miscellaneous tidbits like deviled eggs and jerky — still wanted to go back immediately for more." [CP]

Also that month: Southern Living declares it the best restaurant of 2011.

March 2011: The Quotable Brock On Charlie Rose Brock says cooking is the "only thing I have ever thought about." [Eater]

September 2011: The Seal of Approval from BA Andrew Knowlton deems Husk the best new restaurant in the country in Bon Appétit. The golden quote: "He's trying to re-create the food his grandma knew—albeit with the skill and resources of a modern chef. As a result, he (and Husk) has become a torchbearer for an honest style of home cooking that many of us never truly tasted until now." [BA] 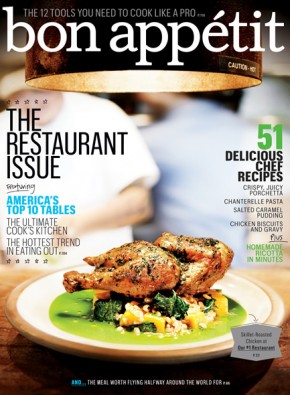 February 2012: The Backlash GQ's Alan Richman rants against The House of Brock, ending his review with a now-famous line, "Husk is proof that a restaurant isn't about what comes in the back door; it's about what goes out the kitchen door."

Richman, however, is charmed by the lettuce wraps. "Brock's crispy pigs' ears with pickled cabbage in lettuce wraps was the most inspired use ever of a dubious foodstuff heretofore best employed as a chew treat for dogs." [GQ]

July 2012: Husk Gets Fashionable The "Fresh Prince's" vegetable tattoos star in Vogue, as the magazine's Jeffrey Steingarten becomes enamored of Brock's seeds and greens. "...although I normally turn a deaf ear to whatever any salad may be trying to tell me, I complied, and it was extremely delightful. I might even say that it was the first salad that had ever truly moved me—actually accelerated my pulse. Can I find a salad such as this in my Manhattan?" [Vogue]

August 2012: Total Saturation Is this the height of Brock mania? His dishes (as in, the actual plates) are in Dwell and he's filmed walking with pigs. City Paper contemplates the post-Husk era, asking "where do we go from here?" [CP]

Oct. 14 2012: Tennessee Bound It quickly becomes obvious where it's heading: to Nashville. The Beard winner says Charleston will remain home, but Husk is multiplying. [The Tennessean]

December 2012: Lists, Lists, Lists The now always-packed destination seems to have the best of everything, from fried chicken to Southern food, depending on which media outlet is taking a look. City Paper's Stephanie Barna admits she parted ways with the restaurant. "I hate to say it, but I think I broke up with Husk. Despite enjoying many visits there, I gave it up to the tourists in 2012. ... I'm going to have to put it back on my list for 2013 and see how it's changed over the course of the year." [ECHS]

January 2013: Brock on TV The Charleston-based chef is in jet-setter mode, seemingly tweeting from all over the world and showing up on an episode of The Layover. In a voice-over, Anthony Bourdain announces Brock is "probably the most prominent chef of the New South." Weeks later, he appeared looking surprisingly-serious as a judge on Top Chef, during an episode filmed in Alaska. [Travel Channel]

March 2013: Beard 2.0 Brock is a finalist for a James Beard Award for outstanding chef for his work in both restaurants. He tells Southern Living, "My name was the first one called and I almost threw up. Those are emotions you never knew you had." [Eater, Southern Living]

May 2013: The Future The chef gets beat out for a Beard award, but the Twitter star's 20,000+ followers witness he's already in full-time Husk Nashville mode. The opening date is set for May 23, and The Tennessean speculates, the restaurant "could help enhance city's culinary landscape." [The Tennessean]

Around midnight today, he tweeted this shot of the pass in his new kitchen: 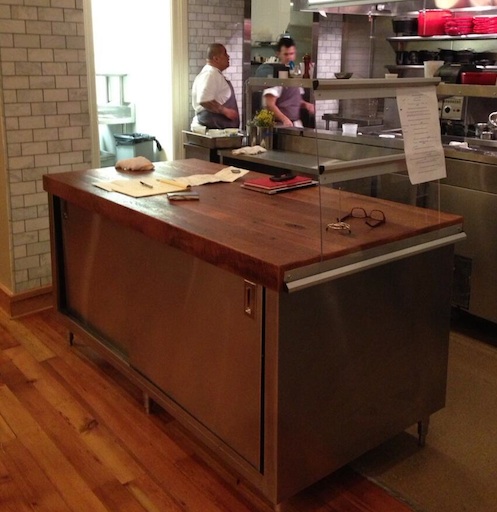 With the opening of a new Husk in just hours, it feels more like the passing of the pig's ear. But despite all this crazed nostalgia and talk of Nashville, those famous ears will still be served today on Charleston's own Queen Street. With benne seeds, no less.