Huge Fire at Light, Squeeze, Speak Easy and The Brick

Share All sharing options for: Huge Fire at Light, Squeeze, Speak Easy and The Brick

A witness of last night's giant roof fire at four East Bay Street bars described the blaze as having, "These spiral-vortex-tornado-like flames." The fire department was called around 1 a.m., and no injuries have been reported. Here's more from Channel 4: 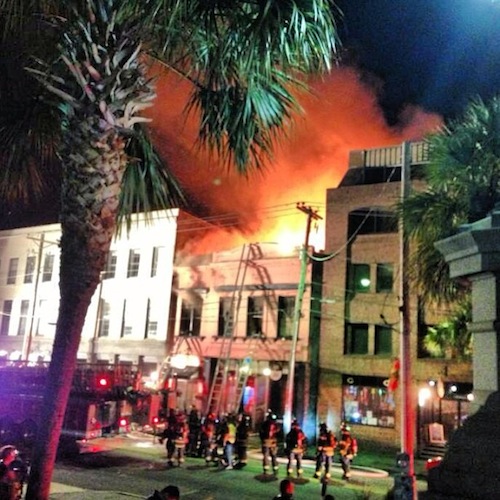 Early in the morning, someone from The Brick tweeted, "Everyone got out safely. The fire above us seems to be controlled and other than some water damage and smoke we are ok. #chs #chsnews"

Live 5 reported, "The fire department says it was able to mostly protect Wet Willy's and Mac's Place, which are neighboring businesses."

The cause of the fire is still unknown. City Paper has updates on road closures, and additional photos from the morning.

More details as they become available.