Share All sharing options for: Burwell's First Year; Innovations From a New Chef

Welcome to One Year In, a feature in which Eater interviews the chefs and owners of restaurants celebrating their one year anniversary. 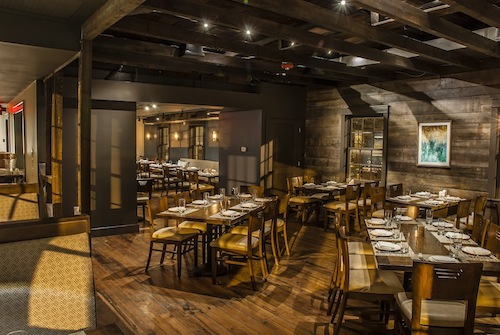 After the national attention for being a lady-centric steakhouse, Burwell's Stone Fire Grill sort of went quiet. Well, it has been a year since they opened their doors, and the tucked away restaurant on Market Street has continued to feed large swells of patrons and redefine traditional meat eateries. Eater spoke with owner Ken Emery about what he experienced in the past 12 months. And since the new chef Jordan Moore is such an essential part of the restaurant going forward, it behooved us to also speak with him. The first interview is with Emery.

What was the first week like?
The thing I remember was getting the construction done, so once that was finished, it was seamless into the opening. It's weird when you're building one day and serving the next.

Where did the concept for Burwell's come from?
It grew out of being here a year and figuring out what Charleston could use. There's so many restaurants here. You don't want to be another of something, so how do you differentiate? I personally spent a year trying to figure out what's here and what's not. Everything's here, and how can you do it different? That's where the modern aspect or what everyone said was the female aspect of it came in. There's a lot of them here, ladies. Professional women are the fastest growing demographic in the country, in terms of making professional and family decisions. It was just tiny details, like the bar is an inch lower. Tiny, tiny details, like all the art. We tried to add another valuable option to Charleston because there's a lot of them. I think we hit a sweet spot, because it has been an unbelievable year.

Have there been any hurdles?
Well, the space is huge. Most restaurants in Charleston have a 90 seat cap, and that's easy to fill up—they look busy all the time. And you're perceived as busier. We can do more than that in 15 minutes. That's one thing I may reconsider. Burwell's is a big, big thing. And that's one thing I didn't think about until after we started; perhaps there's a reason people only do 90 seats. After that, there are different fire ramifications, like sprinklers. But this building was two separate buildings when it was Gilligan's, so we had to put it together. So, it got big. It has worked out in the long run, because of the big parties we can take. It's a good thing.

What's changed this year?
Really, almost nothing, but the chef. Our opening chef was awesome, but the nights were tough. Pounding out 400 covers could wear on anybody. We had a great relationship, and he gave us three months to search for a replacement. We did a national search, interviewed over 75 candidates and picked another local, Jordan Moore.

He's making some changes in the kitchen, because his technique is exceptional. The food will become more detail oriented and more chef driven than it may have been. And that all changed over pretty seamlessly. Ultimately when I whittled all those chefs down to three, I let the kitchen pick who would win. The kitchen picked Moore, because they said they could be inspired by him.

What do you expect from year two?
I'm excited because I think this new chef is wonderful. I think more seafood will come into play here. We've always been a steak and seafood place, even though we're called a steakhouse. This year, we'll probably make a more aggressive move on the seafood end of it. The steaks will never change. We're also going to add a super high-end steak, probably Kobe. The most aggressive move will be the bars. There's two—one here and one upstairs. We're going to add a new bar menu since we have lots of friends and colleagues that hang out at the bar. We want it to be fun and easy. That will be the biggest change.

Eater chatted more with Emery about the packed nights and 400 covers, but what really piqued our interest was where the new chef would take Burwells. Jordan Moore talked with us about the new menu a few days later. Moore has worked at Woodlands, McCrady's and Tristan before heading to Burwells. He said that while perusing Craigslist, Ken's ad sounded like it was directed towards him, so he applied. What follows is the interview with Moore

What attracted you to Burwell's?
A steakhouse wasn't really my thing, but with them trying to stay modern and contemporary and what's new, was the big drive for me. There was going to be some room to play and have fun. They do big numbers, so there was plenty of business. It's a beautiful restaurant. It's still new and there's plenty of people in Charleston who haven't eaten here yet. I'm starting to tweak the food to get it to the modern aspect.

What do you define as modern aspect?
Really just being different than a traditional steakhouse. Step outside of the steakhouse box. Stay with the times. I read a lot of cookbooks and try to stay up with The New York Times, Eater, blogs and look at what others are doing. I try to incorporate that here. I make sure it doesn't get tired or that meat and potatoes repetitiveness.

What changes have you made that have been popular?
The pork belly dish has been popular. I'm still trying to gauge what people want, but they seem receptive. We do the pork belly Buffalo style, so we take the belly and brine it for two days and braise it overnight, portion it out and sear it all over and toss it in our own house-made Buffalo sauce. We serve it with a carrot puree, a pickled celery—I actually grow the carrots— and we do a blue cheese broth foam.

We have a lobster toast on the menu that utilizes the knuckles and claws from the live lobsters. When I came on, they were all frozen. We break four to five dozen lobsters a week. I made sure when I came here to buy live lobsters. We toss it in a malt vinegar and dill aioli. We put it on a baguette from our pastry chef Mark Heyward-Washington and drizzle it with lemon zest oil and salt with a few fresh tomatillos from GrowFoods and pickled garlic with dill sprigs and a piquillo peppers puree and an Italian condiment Neonata, made from baby anchovies.

Where do you see the menu evolving?
A little more foodie kind of change. We have the steak and potatoes crowd, but we are also trying to pull in more of the Charleston food and beverage scene. A lot of our peers may not give us notice because we're a steakhouse, and we want everyone to know we aren't just a steakhouse and we even have a really cool bar menu. We got some rabbit wings in the other day. The front legs are the size of a chicken wing. They're really good and I'm trying to do fun stuff like that. The bar menu, where more industry people come in, is where I get a lot of freedom. Nothing will be over $12. Even if money is tight, you can have a good meal. The main focus is to do some more stuff and even a bit heartier dishes like a bolognese, where you can get full and walk out having had a good time.
·Steakhouses and Women [-EN-]