Welcome to a special edition of Lifers, a feature in which Eater interviews the men and women who have worked in the restaurant and bar industry for over a decade. For Cocktail Week 2013, Eater tracked down a few bartenders who have been with the same establishment for the better part of their career. Here, Eater chats with Dan Wenz from The Griffon. 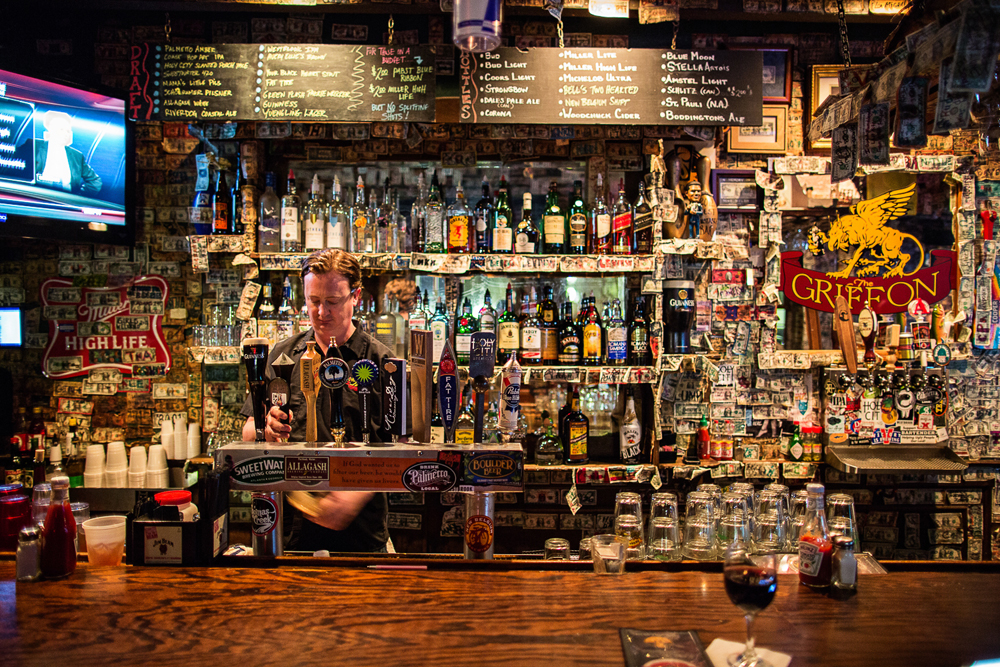 [Wenz is camera shy, so he sent us this snap of a colleague. Photo: Andrew Cebulka]

To say The Griffon is a tad grungy might be an understatement, but that doesn't mean the Lowcountry doesn't love it. The little dive bar near Waterfront Park started in 1996, which was also when the practice of stapling dollar bills to the wall began. Dan Wenz has been with The Griffon for over a decade. He's seen the East Bay area of Charleston go from the place to be on a night out, to more of a destination spot when all the college kids migrated to Upper King. He now co-owns the tavern and works about three nights a week behind the bar. He says he's been a fan of the watering hole since it opened.

How long have you been tending bar here?
I think twelve years—I started sometime in 2000. My partner Scott [London] and I bought it six years ago. I worked for the same guys for years. My wife, actually, got me the job there, and I knew the owners well. She was working there, and I met her at the bar, and we started dating. My roommate at the time got fired and asked if I wanted his job. I have a longer history there than just working. I've been going there since day one.

Do you remember what your first year was like?
Like the last eleven, pretty much the same.

It hasn't changed any?
No, it hasn't changed much and that's the good thing about it. We did lose a lot of kids when Upper King blew up. It used to be a college bar. Wednesday, Thursday and Friday nights were crazy. Every Friday, we had to replace a toilet, a door, a table and a chair. So, we don't miss that. But we've always had a good staple of neighborhood employees. We get a lot of lawyers, a lot of food and beverage [workers] and a lot of tourists, since we're in the middle of a tourist destination. A part of whether we intended it or not was to pretty much stay the same. It's a casual beer bar with cheap food. So, no it hasn't changed and we even have some of the same regulars.

What was the environment like on this part of East Bay Street when you started?
This was the center of nightlife in downtown. We had Charlie's [Little Bar], the Rooftop [at Vendue Inn], Blind Tiger and maybe [Jimmy] Dengate's back in the day. People just sort of made a loop between all of those. Everyone had just been to Dengate's or the Tiger. It was a smaller pool back then. Every time someone opens a new bar on King, you have to wonder if there's any more business to be had, but there's a line at all of them. Now, the area is a bit more touristy.

Would you have expected that shift to Upper King?
No, when I moved here, you didn't go north of Calhoun Street. It was rough. Marion Square was not nice. Lots of bums. You could go up during the day, but at night there was just AC's and Portside. They pioneered it. It's crazy there's so many businesses up there now.

I know you serve a lot of beer, but were there any drinks that were more popular when you started that you don't see now?
It's always been the cheapest. Maybe not Recovery Room cheap, but PBR is still our number one seller. I think the original owners just gave the house away. Everyone that came in, they gave happy hour to. When I first learned to work here, the owner would just ring up 15 bucks for everyone. You could have nine shots of Grand Marnier and it was still the same price. You'd make $500 in tips a night because people didn't have to pay for their drinks.

Though that is one of the changes—shots have gone from Grand Marnier to Fireball [whiskey], mostly. People still drink beer and a ton of shots. I've never seen a town like this where everyone just drinks shots.

Also, when we shifted to keeping craft beers*, there was a slight change. With the help of the Beer Exchange guys, we were one of the pioneers for new beer in this town. We added ten new taps, and people were asking about it. We kinda learned about beer along with everyone else. We realized it wasn't just the strong beer—it was the new flavors. We were always a beer bar. We went from selling 10 cases of Bud Light a night to selling a couple of Bud Light cases and mostly draft beers.

What are you thoughts on the era of the mini bottles*?
I was very happy about never having to answer why we had to use airplane bottles. We made up some creative answers, but even that got old. It was the dumbest. I understand the regulation, but those drinks were so strong. And I don't understand how people still ask to split shots [a practice from the mini bottles era because bartenders had to pour a full 1.7 ounce bottle]. We're the only bar that refuses to split. People who weren't even around for the mini bottles, like 22-year-olds, come in and ask for a Grand Marnier two ways. It doesn't make sense.

Any thoughts for the future of The Griffon?
Leave it alone. It works. That's how we like it.

*[Ed. Note: In 2007, a change in South Carolina law allowed bars to serve beer with a higher alcohol content.]
*[Ed. Note: Until 2006, South Carolina bars were required to use miniature bottles of alcohol instead of the free pour bottles used today.]
· The Griffon [Official]