Welcome to a special edition of Lifers, a feature in which Eater interviews the men and women who have worked in the restaurant and bar industry for over a decade. For Cocktail Week 2013, Eater tracked down a few bartenders who have been with the same establishment for the better part of their career. Here, Eater chats with Mouzon Taylor, Jr. from Thoroughbred Club. 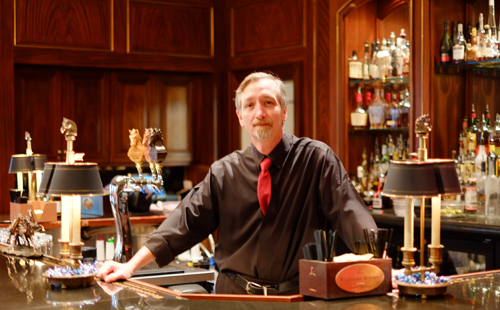 [Taylor behind the bar at Thoroughbred Club]

Mouzon Taylor, Jr. met with Eater after a crazy, busy shift at the Thoroughbred Club, and he could have not been more charming. It's easy to see why he does so well behind the bar—he's informative, delightful and makes a mean old-fashioned. Taylor grew up in the Holy City, so he's seen the changes in the food and beverage culture over the years. He talks with us about his time working for The Charleston Place Hotel, one of the longer-standing institutions in the Lowcountry.

How long have you worked here?
I was at The Charleston Grill for a decade and then we opened this bar [Thoroughbred Club] eight years ago, so I've been here for 18 years. I came here a year before that, from the Marriot Hotel in North Charleston, where I was F and B [food and beverage] and got a job in room service here. Mainly, so I could get my foot in the door at the Grill. As soon as a bartender opening came available at the Grill, I went over there.

What can you say about your first year here?
It was a learning experience. It was like going from high school to college. You know when you're a senior in high school and think you know it all, but then you're a freshman in college and you're like, "whoa." The coolest thing was Michelle Weaver and Bob Waggoner and what they were doing and how helpful they were. I knew the drink part of it, but the restaurant part of it, the food part of it, I was still learning, and they were patient. Over at the Grill, you have to know what they're doing in the kitchen.

The bar part comes natural. When I first started working, we had mini bottles*. The mini bottle thing was so restrictive. I was just making vodka tonics and bourbon and waters. Wine and beer. I couldn't even make a cosmopolitan. We finally got rid of mini bottles and it allowed me to get much more creative. It made my job a lot better, because at times, I just really didn't want to make another vodka tonic. I wanted to make something cool.

What was this part of King Street like when you started?
You had the hotel and you had some high-end shops, but it wasn't as active as it is now. If you were local, the only reason you were at this corner, was you were coming to the Grill. Slowly but surely, the shops came and King Street became a shopping district. Nightlife, bar-wise, restaurant-wise, you had Olde Towne, who's been there for thirty years and Fulton Five. The Market and East Bay were the spots to go, and now it's Upper King. This hotel is kind of like an island. Ninety-five percent of my business are people staying here. Of course, I also have regulars that work around here. The Charleston Grill is more of a mix, we always have locals there. And if I see you once, I'll know you. Know the face, know the drink.

Have you seen a change in who comes into the bar now versus when you started?
The Grill always attracted a clientele celebrating special occasions, and that's what we've seen forever. When I first started working here, guests to the hotel were much more regional. They were down from Atlanta, Charlotte or D.C. And slowly, over the years, we started to get a lot more European travelers, especially when the dollar took a hit. We also do a lot of marketing to Europe, as well as New York and Chicago. One of the coolest things, that I like, is I get to talk to people from everywhere: Australia, Singapore, Russia. I love that part of the job, I really do. It's what keeps it fresh. When it's a really quiet night, I love having conversations with the couple sitting at the bar. I haven't traveled a lot, but I've met people from everywhere. I love that.

With the influx of European visitors, have you seen a change in drink orders?
They want something that's local. They look at our taps, we have Westbrook IPA and other local brews, so when they ask me for a local beer, and I can tell them about the options. They ask, "What do you drink in Charleston," and I think that we drink everything else that others do, but I offer a bit a history. Charleston, being a port city, had a rum culture for the longest time, and I knew we drank Madeira before the revolution, but rum was a good currency. Charleston, back in the 1800s was a rum drinking town. We have a couple of drinks on our menu that are rum-based, like the Charleston Place punch—it's got white rum and dark rum mixed with a few juices, and I always like to tell our guests about how it fights scurvy. So, they get a little history with the cocktail, and I grew up here, so I can talk about Charleston all night long. People want to see the city, but they don't necessarily want to hear the tourist history version.

We touched on the mini bottles, but how soon did you see a change?
Well, immediately, we were able to make not only a wine list, but a cocktail list. The culture changed here in the hotel like that that. And the other thing that was so cool, is we got to experiment. And it expanded. What I love is, I can go to The Gin Joint, Proof, The Cocktail Club, Rarebit and Speakeasy, before the fire, and talking about cocktails with those guys. I go into their bar and say "Make me something." They all know I like drinking bourbon, and usually they'll make me something with bourbon, but we get to discuss what's going on on our menus. I love doing research. Chefs do it with their food, and I get to do it behind the bar. I love walking into the walk-in and looking around. Cilantro? Cucumber? Basil? And I can put that in a glass and taste it. The hotel gets a lot of high-end product and diversified menus, so I can experiment. It's like, "Let's try that!" I always talk to Michelle about what she's getting locally.

Speaking of locally, what are you predicting for fall?
Well, we've been looking at a holiday menu, and my favorite thing to drink during the holidays, and Michelle Weaver too, is an old-fashioned. Years ago, I made her an old-fashioned, and she'd never had one properly prepared. And she said, "This tastes like the holidays," and I said, "It does! Like when you get around Christmastime." It's one of the oldest cocktails. We're excited for the new season.

Taylor actually spoke with us a bit longer about bourbon and entertaining guests, but Eater feels like these stories might be best iterated with a visit to the bar at the Thoroughbred Club. Look for his updated cocktail menu and quiz him on the history of Charleston.

*[Ed. Note: Until 2006, South Carolina bars were required to use miniature bottles of alcohol instead of the free pour bottles used today.]
· Thoroughbred Club [Official]