Jeremiah Bacon and Steve Palmer on The Macintosh

Share All sharing options for: Jeremiah Bacon and Steve Palmer on The Macintosh

Welcome to One Year In, a feature in which Eater sits down for a chat with the chefs and owners of restaurants celebrating their one year anniversary. 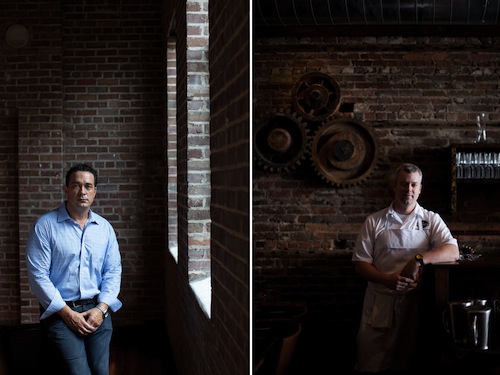 The Macintosh opened last September, and quickly became a favorite on Upper King Street for their Bacon Happy Hour, award-winning burgers and the more refined dinner menu. That's the kind of balance owner Steve Palmer of Indigo Road Restaurant Group and Executive Chef Jeremiah Bacon were trying to craft from the start. It's at once a neighborhood tavern and a James Beard nominated restaurant, where FIG Chef Mike Lata is a regular and you can watch a game at the bar.

How did the concept come to be? Jeremiah: We actually both were looking at this space before we even met, so that was kind of weird. This is something I've been wanting to do since I moved back [to Charleston, after eight years in New York City]. There are no table clothes; we try to keep it real. But we're still incorporating a lot of Charleston elements, design-wise. We left the brick the way it is, we left the exposed beams, and that lends to the overall feel of being accessible. Steve: For me, the idea for The Macintosh was sort of an upscale tavern. I think about Gramercy Tavern in New York a lot...the bar in particular, not necessarily the formal dining room. I felt like there was a hole in the market for a place where you could go and if you wanted to get a beer and a craft burger, that was absolutely OK, but if you could also get three courses and a bottle of wine. Since the economy changed, that has become the new model for upscale dining. I always saw it as a rustic, comfortable environment.

What were you going for with the space? Steve: It's different than what we both imagined, but it's exactly what we wanted. I wanted it to be comfortable and not pretentious at all. It's a pretty restaurant that's for sure. Jeremiah: It was a complete shell [when we got it]. We talk about it a lot, and we call it "rustic elegance." We've got the big, clumsy water glasses and tables and we've got the very elegant wine glasses. There's always that balance throughout the restaurant. We have the untouched brick on the walls, along with the sanded cypress. We try to do that with the food as well.

How has the restaurant changed over the past year? Jeremiah: During the first two or three months, we were getting a feeling for what the kitchen can do, what it can execute. We have a fantastic crew here, most of the guys have been here since day one. We've been able to up the ante, but it's all been falling into place. We feel very fortunate—a lot of blood, sweat and tears went into it. Steve: I think one of the great things about Jeremiah's food—and the most challenging thing—is that the menu changes almost every day. I always joke that if I'm not at The Macintosh for two or three days, I have no idea what we're serving?I just know it's going to be good. Jeremiah: That's part of the spirit of the restaurant. The kitchen is open, so people can watch us...it's part of the energy of the place. For us, too, if you're in the kitchen and you can see the dining room, it spills over.

You've received a lot of acclaim so far. What's next? Jeremiah: Steve Palmer, what do you think of that? Steve: (laughs) Well, the James Beard nominations last year were probably the ultimate compliment. We just want to continue to be well-regarded, not only with our customers, but with our peers. It's been great to see other chefs here; Mike Lata is a regular. It's been great to have the support of the culinary community, locally and regionally.

Were there any pleasant surprises in the first year? Jeremiah: The walk-in traffic is a lot higher than I expected, which is great. But, if you're not ready for it, you can get caught. It's a challenge sometimes, to seat everyone. The patio's helped a lot with that, especially in the spring. But I've been on the other side of town for the past five years, and Upper King Street is a little different. It's a little more of big-city feel, as far as the foot-traffic and the late-night energy. Steve: The response has been a pleasant surprise. I knew—well, I don't think you ever really know when you're building a restaurant—but I knew how talented Jeremiah was and I had a strong feeling that people were going to respond to it.

Has there been anything that didn't work out as expected? Jeremiah: We had a lot of challenges in the beginning with storage. We did not have a walk-in..so the first four or five months were very challenging. So, we solved that problem. We didn't open with all the bells and whistles, but we feel very fortunate. Steve: I wish we had more seats. (laughs)