Wandering around downtown Charleston after 10 p.m., the city feels like a food desert, with closed restaurants dotting like bad mirages. Fortunately for us, the late-night scene is growing and, hopefully, Chef Thurston’s Stars will join the list when they open their doors. Our picks are perfect for nights when you skipped into town late or need more than a slice of pizza to soak up those negronis. 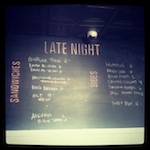 Butcher and Bee, makers of increasingly lauded sandwiches, have slightly odd-ball hours (it’s lunch and late-night only), but people will line up whenever they’re available. The menu changes twice daily, and you can never go wrong. Last call on food: 3 a.m. Thursday – Saturday

Co, the Vietnamese restaurant that opened this spring, has a pared-down evening menu that makes the decision easy. It’s either dumplings or a version of their signature banh mi sandwiches, and it's best to get one of each. Last call on food: 12 a.m. Monday – Thursday, 1 a.m. Friday and Saturday

The French bistro 39 Rue de Jean, on, yes, John St., is the place to slink into when two slabs of bread and something in between just won’t do. The menu is limited, but the place feels so European, it seems natural to be eating into the wee hours. Last call on food: 1 a.m. daily

Understanding the need for more good grub deep into the evening, The Macintosh extended their dining hours this spring. On the menu you’ll always find the “Mac” burger, the truffle fries, some kind of salad and, more than likely, one other dish. Last call on food: 1 a.m. Thursday – Saturday

Izakaya Hiro, the new incarnation of Sushi Hiro, doesn’t exactly burn the midnight oil, but their Japanese options are unlike anywhere else in town. The small plates, like the spicy tuna salad, won’t leave you feeling stuffed before you roll home. Last call on food: 11 p.m. daily

Charleston-Based Taco Boy Expands to the Mountains of Asheville