Kevin Johnson on One Year at The Grocery

Share All sharing options for: Kevin Johnson on One Year at The Grocery

Welcome to One Year In, a feature in which Eater sits down for a chat with the chefs and owners of restaurants celebrating their one year anniversary. 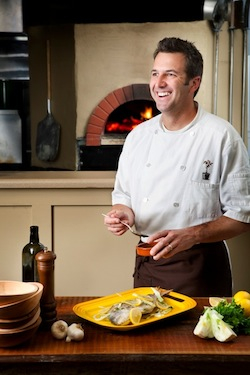 When Chef Kevin Johnson and his wife Susan opened The Grocery last December, they were on the very edge of the action in the Upper King Street area. A year later, they're smack-dab in the middle of the latest boom, with new neighbors like Stars and The Ordinary. When he talked with Eater, Chef Johnson was excited about the growth in the neighborhood and the changes around The Grocery, like the Sunday dinners that he's hoping to turn into a family-style affair. Read on to find out about the whirlwind of a year, and why Johnson's "cautious optimism" about the location has paid off.

Does it feel like it's been a year?
KJ: Absolutely not. We're still trying to complete our opening checklist, to be perfectly honest. We're still working on the little touches we still want to do, little thing we wanted to change. Nothing that anybody notices probably, other than us.

Where did the idea for The Grocery come from?
KJ: Well, it's obviously something I've been working towards for a long time. It's been a major goal of ours...we really saw an opportunity in the Upper King area. That's where we centered our property search. We loved the urban renewal that was going on in that area. It's a great neighborhood to grow into.

We just wanted to open the kind of restaurant we wanted to go to, with an evolving menu. I've never been interested in traditional entrees. We like to go in and experience as much as the menu as possible. Before there were these supermarkets where it doesn't matter whether it's January or August or, quite honestly, if you're in Chicago or Miami, there was a grocery. You didn't now what was going to be on the shelves until you arrived...it was all based on what the fishermen were bringing in or what the farmers had.

Were there any surprises in the last year?
KJ: No, I can't think of anything. I expected the craziness, I expected the stress. But all in all, we're very pleased with our first year. We knew going in that we're on the edge of what's creeping up King Street. We were cautiously optimistic. Without the hotels and the foot traffic, we are kind of a destination, but that's changing rather quickly.

We're certainly proud of how much local support we have. In Charleston, we rely on and are thankful for the tourism, but the amount of loyal local support has been tremendous. In the same breath, the concierges in the area have been very supportive, so it's all very encouraging.

What are your overall thoughts on the first year?
KJ I think overall, it's just amazing how fast it went. It's almost bittersweet. You have all these goals and you get in there and it's such a whirlwind, and it's hard to do the tasks other than just the everyday. We're thrilled that it's like that, and we're looking forward to sustaining the pace a little. It's exciting. I love where we are.

Is there anything new we can expect in 2013?
KJ Hopefully, a continued evolution. We're open Sundays right now, but our plan is to morph the Sunday evening dinner service into a family-style program. Conceptually, you'll be able to get the whole roasted fish or a cassoulet and large sides for sharing.

The atmosphere and elegance is alive, so we thought it was a natural progression to do something different on Sunday. It might be a different price point that would allow people to have a little more fun. We're still hammering it out.