Friends of Eater on the Year's Best Meal

Share All sharing options for: Friends of Eater on the Year's Best Meal

In keeping with Eater tradition, our closeout of the year is a survey of friends, industry types and bloggers. To kick it off in Charleston, we asked the group eight questions, ranging from the restaurants they frequent most to the biggest surprises of the year. Now, it's onto the best meals of the year. Responses are in no particular order, and readers are encouraged to leave answers in the comments. 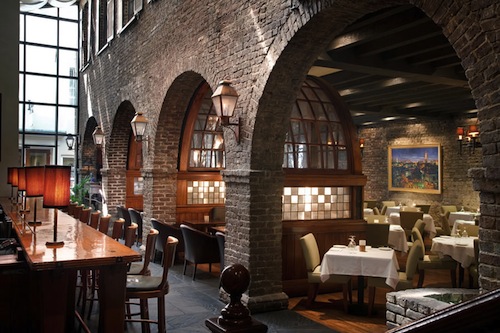 Eric Doksa, restaurant critic for City Paper: Not only was the 14-course meal prepared by Sean Brock and Magnus Nilsson at McCrady's the best meal I had in 2012, it ranks up there as one of the best meals of my life.

Kinsey Gidick, assistant editor at Charleston Magazine: Twice this fall my friend Jenny Ferrara and I shared dinner seated at the bar at FIG. Budget conscious as we were, we split a few dishes each time—the coddled sea island farm egg and the Keegan-Filion farm pork pate being highlights. While I did enjoy some much more extravagant meals in Charleston this year, the two that stand out are my evenings at FIG sipping a glass of wine, splitting a few incredible dishes, and enjoying the company of a good friend. (That said, my end all be all meal of 2012? Seattle's Canlis with my family in August. Absolutely incredible.)

Erica Jackson Curran, arts and scene editor at City Paper: I had a great farewell dinner for friends on the porch at Husk one summer night as a thunderstorm rolled in. I can barely remember what I had — lots of bourbon and some kind of fish — but it was definitely a memorable meal.

Robert Moss, author of Going Lardcore and restaurant critic for City Paper: The Charleston Wine + Food Festival's Ultimate Critics' Dinner. The setting at Ashem Farm was stunning, and all six chefs turned out magnificent courses inspired by Sarah Rutledges's 1847 cookbook The Carolina Housewife. The dish that most wowed me away was the intense, smoky lamb's head soup with buckwheat noodles and a marinated quail egg by Josh Keeler of Two Boroughs Larder.

Stephanie Barna, editor at City Paper: I had several epic meals over the course of the year, but I'd have to say the best was a dinner at FIG. We had family in from Atlanta for a birthday, so we actually made reservations and sat in the dining room for the first time in ages. The food was beautiful, the pacing was perfect, and the fun never stopped.

Angel Postell, Director of Charleston Wine + Food: I have three. First Blue Hill in New York. The fried collard greens were AMAZING and the rest of the 10 courses blew me away. This was also right after I went to the French Laundry, which was another single best of the year from the experience alone. And last, during a 10 day food road trip around the south, my last meal (which I was too full and almost missed) was at Andrew Michael Italian Kitchen in Memphis. Chef Andy Ticer and Michael Hudman are two of the most talented chefs out there. They went to school at Johnson & Wales here and worked some in Charleston and really are incredibly talented. They are both coming to cook at the Festival at Lucca (yes I am going to that) and they are bound to get more national accolades in the future.

Katie Abbondanza, editor at Eater Charleston: There were lots of good ones this year, but a birthday dinner at FIG was all sorts of spectacular. One of the unexpected best bites, though, came from a fig grown in Park Circle that was on a salad at EVO.

Holly Herrick, food writer/cookbook author: Husk - hands down. Had the most perfect, unforgettable lunch there a few months ago. The brined, smoked, fried, Bourbon glazed wings are exceptional, always, and are at the top of my list for a must-do on my (hopefully far, far away) final feast. The freshness of the fish and vegetables there is remarkable, as well. Simple preparations and lots of love coming from the kitchen and staff make it an all-around winner.