Share All sharing options for: Friends of Eater on 2012's Hot Dining Neighborhood

In keeping with Eater tradition, our closeout of the year is a survey of friends, industry types and bloggers. We asked the group eight questions, ranging from the restaurants they frequent most to the biggest surprises of the year. Now, it's all about the hottest neighborhood of 2012. Responses are in no particular order, and readers are encouraged to leave answers in the comments. 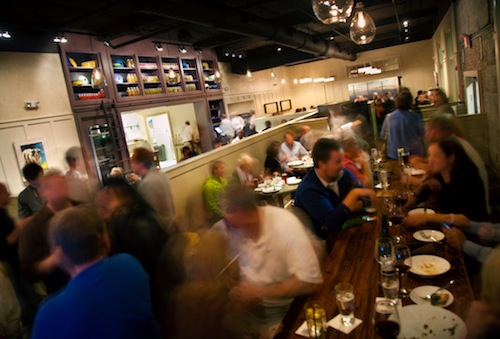 [Photo: Provided by The Grocery]

Q: What neighborhood was the hottest in 2012?

Kinsey Gidick, assistant editor at Charleston Magazine: Elliotborough/Cannonborough. If my Charleston geography is right, in the space of a few blocks you have Kevin Johnson's The Grocery, Robert Stehling at Hominy Grill, Josh Keeler of Two Boroughs Larder, John Ondo at Lana, and Ken Vedrinski at Trattoria Lucca. Not to mention Sugarbake Shop, WildFlour Pastry, and now Brown's Court Bakery too. If I lived in that hood, you'd have to roll me to work I'd be so fat and happy.

Matt Lee of The Lee Bros., authors of Simple, Fresh, Southern: Cannonborough/Elliotborough (or the Cannon St./Spring St corridor, from King St to the Ashley River Br.)

Caroline Nuttall, Publisher CHARLIE: Upper King...you can't throw a stone without hitting five incredible, delicious, write-home-about, hot spot restaurants. And there will be even more next year. You may as well just camp out.

Angel Postell, Director of Charleston Wine + Food: Charleston needs better "neighborhood" dining, but I would give this to John's Island. I love Wild Olive and Fat Hen and wish they were located in West Ashley where I live.

Erica Jackson Curran, arts and scene editor at City Paper: Upper King continues to dominate with dozens of upscale options along with casual burger joints and sweet little bakeries. There's something for everyone, which means I rarely have to leave downtown.