Behind the Bar with Jackson Holland of The Cocktail Club

Share All sharing options for: Behind the Bar with Jackson Holland of The Cocktail Club

To close out Cocktail Week 2012, here's the first installment The Barkeepers, a feature in which Eater meets the fine ladies and gentlemen that manage and work behind the bar at some of Charleston's hottest cocktail spots. 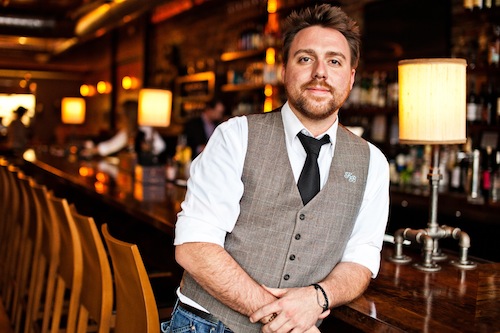 This fall, Jackson Holland was named the beverage director at The Cocktail Club, the epicenter of King Street's growing upscale drinking scene. Prior to his latest appointment, he was bar manager at The Macintosh and he also ran The Bar at Husk during its first year of operation. Some other important details: Jackson's also the co-creator of Charleston Bold and Spicy Bloody Mary mix, keeps only two kinds of ice behind the bar and thinks the 15-minute cocktail won't last forever.

Eater Charleston: Now that you're the beverage director here, can we expect any changes?
Jackson: I'm going to put my spin on it a little bit more as we go along. Coming right in during this season, I was more concerned with making sure it was a smooth transition than changing actual drinks. A lot of my philosophy in mixology and cocktail creating came from being at Husk, and that was all about Southern ingredients. That's why I'm trying to use GrowFood Carolina and local purveyors. And at The Macintosh, Jeremiah's also very into the local movement. He doesn't call it farm-to-table; he grew up here. The farmers are his friends, he went to high school with them. I'm eager to get use products I wasn't able to use at Husk. Having O-Ku in the company [Indigo Road], I have access to the products they're already ordering, like dragon fruit.

Note: As we're talking, Jackson is using a vegetable peeler to remove the skins of some local swingle-citrumelos. The deep yellow exteriors have notes of Chinese five spice, cardamom and ginger, and they're about to become homemade citrumelocello, a twist on the traditional Italian limencello. He puts the zest in four plastic contains and fills each with grain alcohol.

ECHS: How will the citrumelocello appear on the menu?
Jackson: We may end up making it into a cocktail, we may just serve it by the shot. We'll put it in the cooler so it's nice and cold. Until I get to taste it, I won't know exactly how it's going to work. I've never made citrumelocello before, but I've made satsumacello and blood orangecello, which is awesome.

ECHS: So are there any secret drinks or off-the-menu drinks that people order regularly?
Jackson: I wouldn't say there are any secret drinks. We still get a lot of requests for Sazeracs and Old-Fashioneds and, of course we'll make that. We also have a button in the computer called "create your own," so if anybody comes in and says 'I kind of like this and this," we'll make it. Do you want spicy? Not spicy? Tart? Bitter? Do you like vegetal? Do you like fruit? Send me in some sort of direction, and anybody back here could make something for them.