While the world was getting their collective mind blown by the thought of Husk Nashville, Sean Brock was out gator hunting with Fäviken chef Magnus Nilsson, presumably in preparation for this evening's event at McCrady's. The two are hosting a $250-a-head dinner in honor of Nilsson's new book Fäviken (hungry Brock fans who didn't buy tickets take note: McCrady's will be closed to the public tonight). 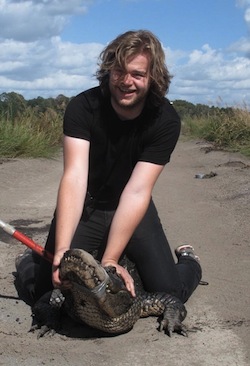 Stretching the notion of Southern hospitality, Brock initiated the Swedish chef into the world of Lowcountry hunting and foraging with some old-fashioned alligator wrangling. He posted the picture with a hashtag "justaddedagatorcourse," so it looks like those attending the Nilsson guest dinner will on this local, if not seasonal, beast.